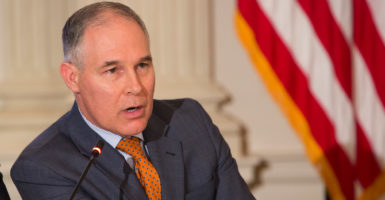 "This was an Airbnb-type situation where I rented literally one room that was used in a temporary status," EPA Administrator Scott Pruitt, pictured here Feb. 12, tells The Daily Signal of questions about his $50-a-night living quarters when he first arrived in Washington. (Photo: Chris Kleponis/CNP/Newscom)

Environmental Protection Agency Administrator Scott Pruitt defended his living arrangement in Washington during the presidential transition, noting that career ethics officials at the EPA found no problems with his choice of where to sleep.

“This was an Airbnb-type situation where I rented literally one room that was used in a temporary status until I found more permanent residence,” @EPAScottPruitt says.

Media reports, Pruitt told The Daily Signal during an interview Tuesday, are incomplete and don’t reflect “the truth.”

“I think the information has been, as things go, I think very intermittent and very sporadic and not terribly complete with respect to what the truth is,” Pruitt said in the interview.

As Pruitt on Monday announced a rollback of Obama administration fuel efficiency rules for vehicles in model years 2022 to 2025, multiple media reports focused on the EPA chief’s renting of a bedroom on Capitol Hill.

Pruitt paid $50 a night for the space to the wife of J. Steven Hart, chairman and CEO of the Washington law firm of Williams & Jensen, whose clients include energy companies. He paid Vicki Hart only for the nights he slept in the room at the condo, according to news reports and critics.

“We had a memo and a statement from career ethics officials here that have actually reviewed the lease, that actually reviewed comps—comparables of similar units,” Pruitt, the former attorney general of Oklahoma, told The Daily Signal.

“And I think what’s missed in this: I didn’t rent a unit,” Pruitt said. “I didn’t rent an apartment. This was an Airbnb-type situation where I rented literally one room that was used in a temporary status, until I found more permanent residence.”

This was during his early days in Washington after the president nominated him as EPA administrator, he said.

“My wife wasn’t here yet. My children were back in Oklahoma,” Pruitt said. “The needs were different. As soon as my wife came up, we moved to a different location where I couldn’t just be living out of a suitcase.”

The regulations issued by the Office of Government Ethics are clear that if a federal employee pays market value for something, it is by definition not a gift under those regulations. … Under the terms of the lease, if the space was utilized for one 30-day month, then the rental cost would be $1,500, which is a reasonable market value.

The lease authorized use by the Administrator and his immediate family, specifically including his spouse and children, and consistent with that provision of the lease his immediate family did stay there when they were in Washington, D.C. The lease did not require payment when the property was not utilized.

Neither of these two provisions render the rental cost under the lease as something other than market value. Therefore, entering into the lease was consistent with federal ethics regulations regarding gifts, and use of property in accordance with the lease agreement did not constitute a gift as defined in those regulations.

The lawmakers contend Pruitt didn’t pay a fair market rate because he paid only for the days he stayed in the space:

Administrator Pruitt didn’t pay $1,500 a month. He paid far less because the unusual lease allowed him to have the condo on demand but he only had to pay for the days he stayed at the condo. Over a period of six months, Administrator Pruitt paid only a total of $6,100 for the furnished condo. This is far below market value and, as such, would constitute an impermissible gift under federal regulations.

Trump reportedly called Pruitt on Monday and told him: “Keep your head up. Keep fighting. We got your back.”

Pruitt also pushed back against reports that he rented space from an energy lobbyist.

“The other thing I would say is that the owner of the residence—people, I’ve heard, say that he’s an energy lobbyist,” Pruitt told The Daily Signal.

Speaking of Hart, Pruitt said: “He’s the chairman of a law firm. I’ve known this gentleman for years. He’s an Oklahoman, and his firm represents these [energy industry] clients, not him. There has been no connection whatsoever in that regard.”

In addition to Trump’s conversation Monday with Pruitt, according to media reports Tuesday, White House chief of staff John Kelly also spoke with the EPA administrator.

Pruitt declined to comment on media speculation regarding his future at the EPA.