Policy Watchdog Asks Probe of Labor Board Member Over Leak 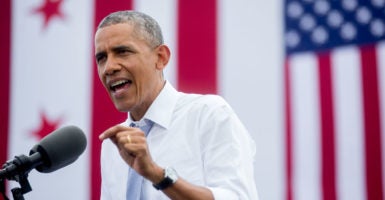 Then-President Barack Obama speaks at Georgetown Waterfront Park in Washington on July 1, 2014. Restoration of Obama-era standards on joint employment liability is the focus of controversy at the National Labor Relations Board. (Photo: Sipa USA/Newscom)

Allegations that a member of the National Labor Relations Board improperly disclosed internal deliberations should be investigated, a Washington labor policy analyst says in a letter to the board’s inspector general.

The board’s pro-union actions demonstrate how it operates as though Barack Obama were still president, and not Donald Trump, the Competitive Enterprise Institute analyst says.

“There appears to be a troublesome double standard at the NLRB,” Kovacs told The Daily Signal in an email. “The NLRB Inspector General Office has shown zeal for investigating Republican NLRB members, but not Democratic members.”

Just after noon Wednesday, a spokesman for the NLRB said the agency would have no comment on the Kovacs letter or how it would respond to the request for an investigation.

Pearce, a Democrat, was chairman of the five-member NLRB from August 2011 until two days after Trump’s inauguration. Named to the board by Obama, he was confirmed by the Senate in June 2010. His second term expires Aug. 27.

Marvin Kaplan, a Republican, is the current chairman of the board, which he joined only last August. Trump named him chairman just before Christmas.

Founded in 1984, the Competitive Enterprise Institute, or CEI, is a libertarian think tank in Washington.

CEI’s Kovacs has argued that Congress needs to step in with a “permanent legislative fix” of the NLRB’s “overly broad and vague” joint employment standards that undermine both entrepreneurs and workers.

Berry “has been expanding conflict-of-interest standards far enough to obstruct [Trump’s] NLRB from functioning,” Kovacs said in his email to The Daily Signal, “yet the investigative office has not examined whether Democratic member Mark Pearce improperly disclosed confidential material about an important case.”

“We hope by calling this problem to the attention of the inspector general, it might spur the office to investigate potential violations,” Kovacs said.

The board, which has been locked in a 2-2 split between Republican and Democrat members, is supposed to be filled out by the arrival of Republican John Ring, a Trump appointee who has yet to be confirmed by the full Senate. A committee approved Ring in a 12-11 vote along party lines March 14.

Historically, the NLRB majority is made up of members of the current president’s party.

The Hy-Brand case concerns the concept of joint employment liability, which the National Labor Relations Board has used to determine when two companies are jointly liable for employment-related policies.

The Wall Street Journal reported March 1 that Pearce told attendees of a Feb. 25 meeting of the American Bar Association in Puerto Rico that an important decision in Hy-Brand would come the next day, Feb. 26.

As it turns out, the National Labor Relations Board on Feb. 26 did in fact move to vacate its previous ruling in Hy-Brand. By vacating its ruling from December, board critics charge, it restored joint employment liability to a more burdensome standard for business in operation during the Obama administration.

In his letter to the NLRB’s inspector general, Kovacs cites a board regulation that says “no present or former employee or specially designated agent of the Agency will produce or present any files, documents, reports, memoranda, or records of the Board or of the General Counsel … without the written consent of the Board or the Chairman of the Board.”

An investigation is needed to “protect the integrity” of the board’s upcoming proceedings in the Hy-Brand case, Kovacs says in his letter. He suggests the inspector general focus on these key questions:

Kovacs also points out that information protected under the board’s rules and regulations has been interpreted to include internal deliberations, according to an inspector general’s report.

A motion for reconsideration of the board’s decision to vacate its Hy-Brand ruling was filed March 9.

Kovacs details some of the main arguments in the motion in a post that takes a critical view of the board’s decision.

The motion, for instance, argues that the board “usurped authority under the National Labor Relations Act,” and that it made its decision in a manner that violates the public notice requirements of the Sunshine Act.