Why the US Must Befriend Hungary’s Populist Leader 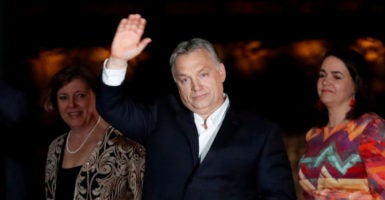 Hungarian Prime Minister Viktor Orban won a convincing majority in Sunday’s parliamentary election. Even the day before the election, The Guardian was all too pleased to showcase the left’s apoplexy by running the headline “Hungary’s war on democracy is a war on democracy everywhere.”

This has it exactly backward, of course. Liberals may have a thousand reasons not to like Orban, but their beef is with the Hungarian electorate, which keeps re-electing him democratically by ever-increasing numbers.

If global managerial elites believe the typical Hungarian voter cannot be trusted with his own fate, they should at least be up front about it.

Orban has delivered Hungarians economic growth the likes of which have not been seen in Western Europe in generations (4 percent growth last year and 3 percent in 2016). He’s also stood up to the unelected and distant European Union bureaucrats in Brussels, rejecting their demands that Hungary take in more immigrants.

And notably, Orban has led a campaign against the Hungarian-born American billionaire George Soros, who funds far-left causes around the world.

Hungarians on Sunday responded to this policy mix by giving Orban not just a third term in office, but a supermajority in parliament that he can use to ram through real constitutional changes. Orban’s Fidesz party won 49 percent of the vote—the nearest competitor was the far-right Jobbik, which won 20 percent.

Leftist critics have been left to grumble that the results were unfair because Orban has squeezed the opposition, but as former Margaret Thatcher aide John O’Sullivan explained on Monday, this doesn’t hold water:

It simply cannot be explained away as the result of gerrymandering, since a 49 percent share of the total vote would mean a landslide in seats under almost any multi-party electoral system. Nor can it be attributed to the right’s dominance of the media, which was anyway exaggerated—there were newspapers, magazines, television stations, websites, and hoardings putting across the slogans and arguments of both left and right opposition parties.

Orban is not perfect—not many politicians are, in any part of the world. We keep hearing reports that, for example, he uses corrupt and crony practices with businesses not only to distort the economy, but to expand influence and retain power.

However, the best way for the Trump administration to cultivate Orban’s potential and mitigate his downsides is by finally jettisoning the Obama-era policy of keeping him at arm’s length diplomatically.

Under Trump’s first secretary of state, Rex Tillerson, U.S. diplomacy began to move away from this aspect of Nulandism. We hope that current CIA Director Mike Pompeo, nominated by President Donald Trump to replace Tillerson, and the new national security adviser, John Bolton, will accelerate the process while retaining Nuland’s more forthright and no-nonsense approach to the Kremlin.

Only allies can speak as friends, and only friends can advise Orban, for example, not to interfere with the already-beleaguered government of Ukraine, as it did last year when Ukraine passed a language law that Budapest opposed.

Ditto for Orban’s “Stop Soros” bill. On Monday, fresh from its landslide victory, the newly elected government said it now had a mandate to pass it. The bill would require nongovernment organizations that work on migration issues to register with the government, and would empower the government to ban NGOs that pose a “national security risk.”

The Orban government is hardly alone in trying to stop Soros from destabilizing his society.

Soros uses his Open Society Foundations and his billions to undermine governments and societies around the world, in an attempt to weaken conservative values regarding the family, the church, and the nation-state. Just a few months ago, Ireland declared illegal Soros’ donation of 137,000 euros to the pro-abortion side in that country’s current, hard-fought referendum to legalize the practice.

So we wish Orban well in shoring up Hungary’s government institutions and civil society.

But a U.S. government that Orban perceives as a friend can also quietly counsel the prime minister against any attempt to use the law for a generalized crackdown against opposition forces and NGOs—lest Hungary really become what its critics charge it already is but isn’t. Becoming a Singapore-style democracy in name only—or worse yet, a Putin-style one—with a titular opposition is not the way of the future.

Orban’s government, like those of some of Hungary’s neighbors, especially Poland, have become anathema to the elites both here and in Europe because of their opposition to taking in large numbers of immigrants.

The redrawing of maps and ethnic cleansings that accompanied the two great wars of the 20th century left both Hungary and Poland almost ethnically homogenous. Their attempts to remain ethnically pure are no answer for France, Germany, and the United Kingdom—and much less for the U.S.

Having said that, it may be Orban’s very own European values that ultimately lead to a solution for ethnically diverse nations that want to heal their internal ethnic rifts.

Polish Prime Minister Mateusz Morawiecki recalled that a former French president once said to Poland’s leaders, “You have values, we have funds.” Morawiecki added, “Well, I would love to help the West with proper values.”

The Western duty to be tolerant of others boils down to Matthew 22:39: “Thou shalt love thy neighbor as thyself.” But if you don’t love yourself—your own society—you cannot love others.

By constantly reminding their neighbors not to be embarrassed of Europe’s history—on the contrary, to stand up for Western values—Budapest, and also Warsaw, are pointing the way toward being truly inclusive by offering immigrants and their children a value system to which they can adhere.

For all these reasons above, the good, the bad, and the ugly, the pragmatic course of action will be for America to work with Orban, as he will be in charge for the foreseeable future.