Why The Atlantic’s Editor-in-Chief Fired Kevin Williamson, In His Own Words 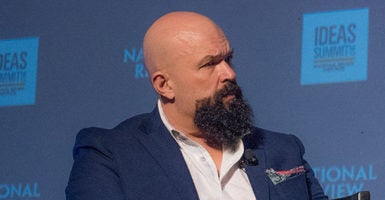 The Atlantic made the decision on Thursday to fire newly hired conservative columnist Kevin Williamson after pressure from outside groups over a controversial tweet and comments on a podcast appearance about abortion.

Editor-in-Chief Jeffrey Goldberg broke the news internally with a note to his staff first.

Last week, I wrote you about our decision to hire Kevin Williamson. In that note, I mentioned my belief that Kevin would represent an important addition to our roster of Ideas columnists, and I addressed the controversy surrounding some of his past tweeting and writing. I expressed my belief that no one’s life work should be judged by an intemperate tweet, and that such an episode should not necessarily stop someone from having a fruitful career at The Atlantic.

Late yesterday afternoon, information came to our attention that has caused us to reconsider this relationship. Specifically, the subject of one of Kevin’s most controversial tweets was also a centerpiece of a podcast discussion in which Kevin explained his views on the subject of the death penalty and abortion. The language he used in this podcast—and in my conversations with him in recent days—made it clear that the original tweet did, in fact, represent his carefully considered views. The tweet was not merely an impulsive, decontextualized, heat-of-the-moment post, as Kevin had explained it. Furthermore, the language used in the podcast was callous and violent. This runs contrary to The Atlantic’s tradition of respectful, well-reasoned debate, and to the values of our workplace.

Kevin is a gifted writer, and he has been nothing but professional in all of our interactions. But I have come to the conclusion that The Atlantic is not the best fit for his talents, and so we are parting ways.

We remain committed to grappling with complex moral issues in our journalism. Some of our colleagues are pro-life, and some are pro-choice; we have pro-death-penalty and anti-death-penalty writers; we have liberals and conservatives. We obviously understood that Kevin himself is pro-life when we asked him to write for us. This is not about Kevin’s views on abortion.

We are striving here to be a big-tent journalism organization at a time of national fracturing. We will continue to build a newsroom that is, as The Atlantic’s founding manifesto states, ‘of no party or clique.’ We are also an organization that values a spirit of generosity and collegiality. We must strive to uphold that standard as well.