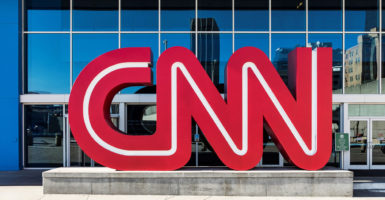 A vast right-wing conspiracy is taking over America’s newsrooms.

That’s the narrative that has taken off with the release of a video by the popular news site Deadspin, which shows news anchors on multiple local stations reciting the exact same lines.

Those local stations are all owned by Sinclair Broadcast Group, a media group that is generally considered conservative or right-leaning. According to the Washington Examiner, Sinclair owns “193 TV stations spanning over 614 channels in 89 U.S. markets.”

How America’s largest local TV owner turned its news anchors into soldiers in Trump’s war on the media: https://t.co/iLVtKRQycL pic.twitter.com/dMdSGellH3

A number of media pundits and politicians wildly overreacted to the recitation of fairly innocuous lines—that have been used in CNN ads—by calling Sinclair’s editorial practices a threat to democracy and an omen of coming authoritarianism.

On Wednesday, Sen. Dick Durbin, D-Ill., sent Sinclair a letter, according to Talking Points Memo, asking it to explain why it is telling local affiliates what to say and demanding that it reveal its editorial practices.

Amy McGrath, who is running for office in Kentucky, decided to pull ads from a local Sinclair affiliate, saying the multiple video broadcasts posed “an extreme danger to our democracy” and that they mimic “the propaganda efforts that authoritarian regimes often use to control the media in their own country.”

Is it not ironic that in response to Sinclair’s alleged signs of “authoritarianism,” government officials are now prying into the editorial decisions of a private company?

As one might expect, media figures pounced on the video and lashed out at Sinclair.

John Oliver, the comedian and host of “Last Week Tonight,” said the montage made the journalists look like “a brainwashed cult.”

Liberal late night host Jimmy Kimmel said on Twitter that Sinclair’s editorial practices were “dangerous to our democracy.” This nearly exact phrase, ironically, was used in the Sinclair promo that he found so dangerous.

this is extremely dangerous to our democracy https://t.co/D1T8Z7J2Wn

MSNBC’s “Morning Joe” co-host Mika Brzezinski said, “This looks like something we would mock the Russians for doing during the days of Pravda.”

Perhaps the most absurd criticism of Sinclair—and that’s a high bar—came from disgraced CBS anchor Dan Rather.

Rather, who lost his job in 2004 when he ran a false story about President George W. Bush on the eve of an election, chimed to castigate news hosts for reading scripts and peddling fake news.

“News anchors looking into the camera and reading a script handed down by a corporate overlord—a script meant to obscure the truth, not elucidate it—is not journalism,” he said. “It is propaganda. It is Orwellian. It is on a slippery slope toward some of history’s most destructive forces.”

“If you read the script, it’s not propaganda, it’s a statement of our commitment,” Livingston told The Daily Signal. “To say that this is comparable to state-controlled television. That’s crazy.”

While playing all of the identical broadcasts together in a synchronized fashion certainly makes them sound creepy, what they actually said is fairly innocuous.

“[W]e’re concerned about the troubling trend of irresponsible, one-sided news stories plaguing our country,” the news anchor script reads. “The sharing of biased and false news has become all too common on social media. … More alarming, some media outlets publish these same fake stories … stories that just aren’t true, without checking facts first.”

You can read the rest of the script here. It is hardly a call to authoritarianism, and at most it is marginally political.

President Donald Trump even jumped into the controversy, praising Sinclair on Twitter.

So funny to watch Fake News Networks, among the most dishonest groups of people I have ever dealt with, criticize Sinclair Broadcasting for being biased. Sinclair is far superior to CNN and even more Fake NBC, which is a total joke.

Sinclair’s politics certainly lean to the right. But that doesn’t mean it is intentionally misleading its audiences.

Would the repeated script be so controversial if it had been spoken by left-leaning journalists at CNN?

That’s not too hard to imagine—“fake news” has been a favorite target of left-leaning media outlets since the 2016 election. It was The New York Times, after all, that first sounded the alarm about the spread of “fake news” on social media.

“Fake news is dangerous mischief and takes advantage of the fact that social media generally rely on rapid-fire algorithms and not deliberate human editing,” The Washington Post editorial board wrote in 2016. “The internet has become a vital forum for democratic debate; it is essential that that interchange not be warped by propaganda and lies.”

These concerns over authoritarianism and journalistic integrity sound awfully similar to the concerns voiced by Sinclair-owned outlets.

Like most other media groups, Sinclair wants to be known as an honest and trusted source of information.

Saying that this is what differentiates it from its media competition is hardly unique—other news outlets often say similar things.

This is hardly a new and novel practice.

Of course, media outlets may not exactly have disinterested reasons for suddenly chastising Sinclair.

Sinclair is currently attempting a merger with Tribune Media—another large local media provider—and will have to get approval from the Federal Communications Commission to do so.

Some have called for blocking the merger, including some conservatives. It makes sense that in a contentious media market, news outlets would try to gain the upper hand on one another.

“We’re all competing for eyeballs. And we’re competitors,” Livingston said.

“They see we are doing great things across the country,” he continued. “ … You see that and you can see why we are a threat.”

As ridiculous as the video looked, with all the anchors delivering the same lines verbatim, using identical lines on multiple shows isn’t exactly an uncommon media practice.

Late night host Conan O’Brien has actually been making fun of this practice for years, as conservative commentator Stephen Miller pointed out.

But this is controversial now because you want it to be.

All this is to say that, regardless of potential bias or skewing of the news, the cries of “authoritarianism” levied against Sinclair are completely unfounded. Government is not forcing anyone to watch any particular news station. America offers media companies on both the right and left a mostly free marketplace to thrive.

But some voices are, of course, unhappy with the outcome of the free market.

>>> The Founders Had an Answer to the ‘Fake News’ Problem

If tyranny is in fact lurking around the corner, it will most likely come from government following the advice of this New York Times editorial:

We must rediscover the term ‘public good,’ holding entities like Sinclair and Fox News to account for disseminating outlandish propaganda. Yes, we treasure our First Amendment, but we also treasure our democracy.

Maybe it’s time to bring back the Fairness Doctrine. Certainly it is time to force the FCC to follow the law and fulfill its mandate under our laws to promote diversity of access to the public airwaves. In the end, we must all rededicate ourselves to democracy. Allowing our media to become the province of a few ideological extremists bent on ownership of our airwaves is not just bad for the republic. It could be its end.

Yes, we like the First Amendment, but we’d rather gut it to save our vision of “democracy.”

As David Harsanyi wrote in The Federalist, “As long as we have a media market and inhibit government meddling in speech … the idea that we are powerless to turn away from ‘propaganda’ is nothing but alarmism.”

If viewers don’t like the programming of Sinclair, or The Washington Post, or CNN, it’s very easy to tune out and find something else.

Moreover, recent deregulation by the FCC—such as allowing newspapers to go into the broadcasting business—makes it even easier for companies to enter that market than was possible in the mid-20th century.

James Gattuso, a regulatory and telecommunications expert at The Heritage Foundation, wrote, “The power over information that the FCC’s rules were meant to control simply is no more. In today’s marketplace, the old media is threatened rather than threatening.”

The legacy media’s missteps and perceived bias have opened up opportunities for other outlets to capture their audiences. That’s a good thing. But some voices are, of course, unhappy with the outcome of the free market.

It is that desire to shut down alternative media, not the editorial slant of private media companies, that would put our institutions and liberty at risk.