11 Reactions From Conservatives Unhappy With the Massive Government Spending Bill 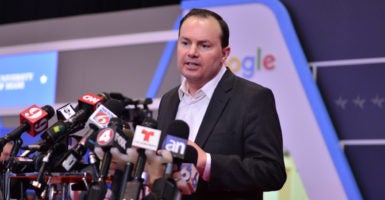 Conservative lawmakers are disgruntled and outraged by the $1.3 trillion omnibus spending bill passed by Congress.

But shortly after 1 p.m., Trump announced at the White House that he had signed the spending bill, calling the massive, last-minute package “ridiculous” but asserting that his highest duty as president is to “keep America safe.”

1. Sen. Rand Paul, R-Ky., who vigorously fought the omnibus, said he stands in agreement with Trump that the president should veto the spending bill.

I agree @realDonaldTrump should veto this sad excuse for legislation because it’s $1.3 trillion in spending that (almost) no one read. https://t.co/8aOSAOIESY

“Six times over the past six months, congressional leadership has chosen to fund our $4 trillion government by last-minute, take-it-or-leave-it spending bills with no time for debate or amendments allowed,” Lee said. “This is no way to run a government, but unfortunately has become ‘business as usual’ here in Washington.”

A small group of congressional leaders have negotiated a 2,232 page, $1.3 trillion bill to fund the government completely behind closed doors, giving Congress less than 48 hours to review it. I will absolutely be voting no. https://t.co/HwBbfl3J87

Tonight’s #omnibus bill is another symptom of Washington’s spending illness; massive overspending in a 2,200 page bill released only hours before the vote. I could not support this massive bill nor the broken budget process that brought us this bill. https://t.co/boQqRBzPKF

“This is no way to govern,” the Oklahoma senator said on Facebook. “I complained about this when Democrats were in control of Washington—it’s still wrong when Republicans control Washington.”

The @freedomcaucus would fully support you in this move, Mr. President. Let's pass a short term CR while you negotiate a better deal for the forgotten men and women of America. https://t.co/Dj05V8hevl

The House Freedom Caucus, a group of the chamber’s most conservative members, came out in official opposition to the spending bill Wednesday.

6. Rep. Mia Love, R-Utah, said she voted no because the spending bill “flies in the face of Utah’s principles of responsible governance.”

7.  Rep. Dave Brat, R-Va., said one major reason he voted no was the lack of funding for Trump’s border wall.

Reaction to the passage of the Omnibus spending bill: pic.twitter.com/C4jaaWgJx4

8. Rep. Matt Gaetz, R-Fla., told Fox News Channel that “we shouldn’t have to bankrupt the country our troops are fighting for.”

"The Republicans failed to deliver on our promises to defund planned parenthood, defund sanctuary cities and build a wall. Supporters of this legislation will point to increase military spending, but we shouldn't have to bankrupt the country our troops are fighting for" pic.twitter.com/E55McENByT

Forcing a vote on a 2,232 page bill 14 hours after releasing the text was absolutely unreasonable. Congress needs to do its job and put together a real spending bill. https://t.co/SQr5pZAF9u

.@realDonaldTrump I stand with you, Mr. President. Veto this #omnibus and let's fund the wall and get a better deal for the American people.

11. Rep. Ron DeSantis, R-Fla., said more members should have been involved in writing the spending bill.

Stuffing more than $1.3 trillion in spending and a number of unrelated policy issues into a single, mammoth bill and ramming it through without any time for scrutiny shows that Congress has hit rock bottom.

Ths report was updated to reflect the president’s signing of the spending bill.