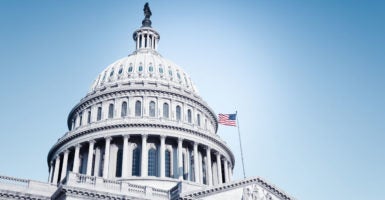 The Senate followed the House by passing a $1.3 trillion spending bill early Friday morning that funds the government through September, after taking 11 hours to consider the 2,232-page bill.

The spending bill and its contents attracted ire from both parties, but Republicans in the majority took issue with both the substance and the process of the legislation.

“Is it perfect? No. Is it exactly what we asked for in the budget? No. Were we ever going to get that? No. That’s not how the process works,” Office of Management and Budget Director Mick Mulvaney said.

“This is what a bill looks like when you have 60 votes in the Senate and the Democrats get a chance to take their pound of flesh,” Mulvaney, a former congressman from South Carolina, said.

And Friday morning, Trump surprised both sides of the aisle by threatening to veto the package.

The bill includes $1.5 billion for structures along the border with Mexico, but only on projects that already have been started. Trump’s border wall prototypes will have to wait for another funding bill.

As it was with the House vote, more Republicans in the Senate voted against the measure than did Democrats.

Congressional leadership released the full text late Wednesday, giving House members around 20 hours to look the bill over before the vote to pass it and deliver it to the Senate just before noon Thursday.

“There’s no way humanly possible to read 2,232 pages,” Rep. Thomas Massie, R-Ky., said, according to The Washington Post. “Sometimes they jam you, but they pretend to give you three days to read it. All the veneer is off now.”

By the time the bill got to the Senate, more conservative members of the upper chamber voiced complaints as well. Sen. Rand Paul, R-Ky., made a splash online by live-tweeting the printing and reading of the bill.

Well here it is, all 2,232 budget-busting pages. The House already started votes on it. The Senate is expected to soon. No one has read it. Congress is broken… pic.twitter.com/izvJlUEgUM

“This could have been written by President [Barack] Obama and liberal Democrats,” Paul said in an interview on Fox News Channel’s “Tucker Carlson Tonight.”

The generous spending increases for many government agencies, including the Department of Defense, irked other Republicans who have campaigned about irresponsible spending, the ballooning size of the federal government, and wasteful agency projects.

“I don’t understand why when President Obama does what we’re about to do, it’s bad for the country, but when we do it, it’s good for the country,” Sen. John Neely Kennedy, R-La., said. “This bill is going to need a lot of Democratic support, and I suspect it’ll get it. They’re just as happy as kids at Christmas.”

Sen. Bob Corker, R-Tenn., who will retire when his term expires in January, held a frank but unorthodox discussion leading up to the final vote, which started around 12 a.m.

“Could you explain to us what has occurred over the last 11 hours that keeps us here voting on a bill that we all know is going to pass, regardless of how we vote on it, that has kept us from just going ahead and voting?” Corker said. “And could we in the future possibly try to resolve these things at a decent hour or come back the next morning and vote?”

Senate Majority Leader Mitch McConnell, R-Ky., replied that he was pleased to be able to get to the vote after a long day of negotiating with his own party:

My principal responsibility is begging, pleading, and cajoling. I have been in continuous discussions, shall I say, with several of our members who were legitimately unhappy about one aspect or another. … I must say after a long and intense day of such discussions with several of our members who had legitimate concerns, I’m relieved rather than depressed that we might be able to actually finish tonight.

Corker noted that many senators had flights scheduled back to their home districts Friday, and so he ceased his objection.