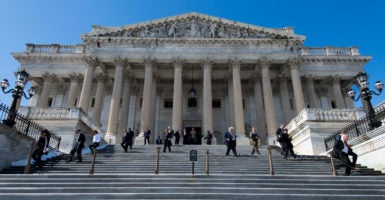 Members of Congress walk down the Capitol steps Thursday after the final vote of the week. (Photo: Bill Clark/CQ Roll Call/Newscom)

The House approved a $1.3 trillion omnibus spending bill Thursday to fund the government through September, allowing federal offices to stay open at the weekend but hampering some of President Donald Trump’s agenda items.

The House approved the so-called omnibus bill by a vote of 256-167, but most of the dissenting votes came from Republicans, who hold the majority, not Democrats.

In total, 145 Republicans and 111 Democrats voted in favor of the 2,234-page bill, which House leadership released only Wednesday night.

>>> Update: The Senate passed the massive spending bill by a vote of 65-35 early Friday morning after taking 11 hours to consider it, sending the package to President Donald Trump, who unexpectedly threatened a veto because it failed to address the so-called “Dreamers” and significant border wall funding. <<<

“This isn’t the bill I would have written, but I’m proud it provides $117 billion more than President Trump requested in nondefense investments to grow the economy, create jobs, and help American families,” Rep. Nita Lowey, D-N.Y., said on the House floor before the vote.

Lowey also thanked the Republican leadership and the House Committee on Appropriations “for its tireless work forging this bipartisan package.”

House Speaker Paul Ryan, R-Wis., and Senate Majority Leader Mitch McConnell, R-Ky., sold the spending package based on an $80 billion increase in defense spending, but otherwise the legislation did not advance many conservative, or even Trump administration, priorities.

The bill provides $1.5 billion for physical barriers, technology advancements, and more agents for the southern border, but doesn’t provide funding for any new wall prototypes. It also limits how many Immigration and Customs Enforcement agents may be hired, and continues funding for sanctuary cities and for Planned Parenthood.

The package would increase funding for arts and humanities endowments, despite Trump’s recommendation to eliminate the agencies entirely.

The funding bill has a good chance of gaining Democrats’ support in the Senate as well.

Minority Leader Chuck Schumer, D-N.Y., praised several aspects of it and said in a written statement Thursday that he was “urging my colleagues on both sides of the aisle and in both chambers of Congress to vote for this bill.”

The Senate has a little more than a day to consider the bill before the government runs out of funds and shuts down at 12:01 a.m. Saturday.