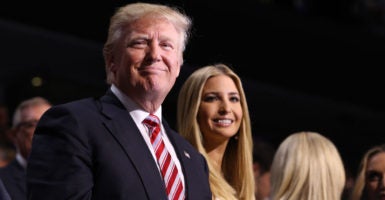 President Donald Trump and Ivanka Trump are participating in an event about young adults this Thursday. (Photo: Jessica Griffin/TNS/Newscom)

President Donald Trump will speak to millennials this week at a conference touting how his policies benefit young people, while also addressing the growing opioid crisis among the young and the lack of free speech on college campuses.

Trump won’t deliver his remarks in a traditional speech, but will instead be interviewed by Charlie Kirk, the executive director of Turning Point USA, a conservative group that educates college students on the principles of fiscal responsibility, free markets, and limited government.

The event is set to take place at 1 p.m. on Thursday, March 22, at the Eisenhower Executive Office Building.

“The booming economy, jobs, deregulation, and safeguarding free speech are just some of the ways the Trump administration is helping to promote millennials,” a White House description of the forum says. “The administration plans to articulate the reasons why these policies translate into opportunity for this core group of Americans.”

Millennials—those born between 1982 and 2000—represent more than a quarter of the nation’s population, numbering 83.1 million, according to the U.S. Census Bureau.

Millennials are often characterized as a left-leaning demographic.

That can change, “when people pay attention to the outcomes and the reality versus the emotional, inflammatory messages, what they can touch, and not just feelings,” said Katie McAuliffe, federal affairs manager for Americans for Tax Reform.

“On the tax side, I’m asking then to do what most millennials don’t do, and what most people don’t do, because of technology,” McAuliffe, who is participating in the forum, told The Daily Signal. “That’s ‘Look at your paychecks.’ It should be a lot bigger. If it’s not, you need to look to your state governments. So, I’d encourage millennials to ask their employer for a copy of their pay stubs.”

The economics panel will include Ivanka Trump, the president’s daughter and senior adviser, and Labor Secretary Alexander Acosta, and will be moderated by Mercedes Schlapp, the White House director of strategic communications.

College affordability will also be a key topic, and the discussion will go beyond simple loan forgiveness, which Onwuka called a “Band-Aid solution.”

Onwuka also said the panel will be promoting apprenticeships for younger people who choose not to get a four-year college degree.

“This generation will be the leaders soon,” Onwuka told The Daily Signal. “Hearing their concerns and getting involved now is a smart thing for the administration to do.”

A separate panel on the opioid addiction crisis will also be part of the event, with participants yet to be announced.

Kellyanne Conway, counselor to the president, will moderate both the free speech and opioid panels, according to the White House’s preliminary schedule.