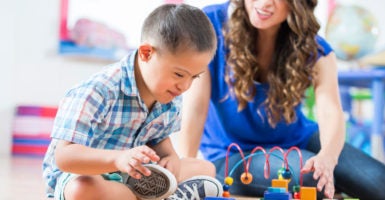 In France, there is actually a movement to make it illegal to show an ad featuring a Down syndrome baby who has become a happy and healthy Down syndrome kid because it might move people to compassion. (Photo: Steve Debenport/Getty Images) 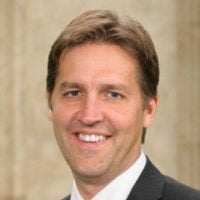 For the past couple weeks, and especially this weekend, [my wife] Melissa and I have thought of this little guy, Lucas, Gerber’s famous “Spokesbaby” for 2018. He’s all the things we know and love about babies—sweetness, joy, and undeniable cuteness. But Lucas is something more: a vivid picture of the dignity of all human beings. Lucas is an adorable baby, and Lucas has Down syndrome.

“This is such a proud moment for us as parents knowing that Lucas has a platform to spread joy to people all over the country." — Gerber Spokesbaby Lucas' mom https://t.co/bmXkjC8KuW pic.twitter.com/wSXFquGOw7

Lucas’ dignity is inherent, given by God, and it stays with him past the cute, cuddly phase of babyhood.

The truth of who he is stands in stark contrast with some of the news we see coming out of Europe lately. In Iceland, and in Denmark, there are actually groups that brag, “we’re closer to getting to 100 percent than anybody else. We’re going to be first to be 100 percent Down syndrome free.”

Sadly, they’re not talking about a near-miraculous scientific breakthrough. They’re crowing about eliminating these babies before they’re born because it’s now possible to screen for Down syndrome at such an early age.

In France, there is actually a movement to make it illegal to show an ad featuring a Down syndrome baby who has become a happy and healthy Down syndrome kid because it might move people to compassion.

The contrast between the values displayed across Nebraska and those being bragged about in Europe is hard for Melissa and me to stomach.

Consider Kyle Kwarcinski. He plays basketball for Ashland-Greenwood High. Kyle has Down syndrome. With seconds left in a recent game, Kyle came onto the court and his team designed a play for him to take the final shot. He missed. But opposing players grabbed the rebound and threw it right back to him until he hit the shot. No one had to ask them to offer this kindness, this acknowledgement of Kyle’s dignity—they just knew to do it. And they celebrated with Kyle and with his teammates.

In West Point, the Harlem Globetrotters were moved to send a teammate 1,000 miles across the country to honor James Meiergard, now internet famous for a behind-the-back half-court shot, which he made—twice. James has Down syndrome. But the Globetrotters didn’t send a guy to James’ school just because the shot was epic—though wow, was it ever—he was there to celebrate James’ humanity with family and community—his obstacles and his triumphs.

And just a few weeks ago, in the hallowed sport of wrestling (bias acknowledged), a Ralston High School wrestler noticed that a young man on the Seward team, Grant Fehlhafer, was wearing a singlet, but was not competing in the district tournament. Grant has Down Syndrome.

The young man approached Grant and his coach, and asked if Grant would like to wrestle. With a referee on the mat, cheerleaders shouting, and the crowd going wild, Grant pinned his opponent and had his arm lifted in victory in the impromptu exhibition match. That photo is everything that’s right about high school sports and it just gets you.

Read these stories, then check your local newscasts and newspapers for more. I promise you’ll find them. Why? Because good stories highlight great people, and anyone who has spent time with these kids knows they are some of the most loving, most joyful, most caring people in our communities. That’s something to celebrate.

The celebration and acknowledgement of these young people is encouraging, especially in sharp contrast to places around the world, where all babies are not valued, in every form, as being created in the image of God.

That’s why we hold on so tightly to these simple, but powerful, stories of human dignity that remind us to look for the beauty and value in others, regardless of our differences.

Grant’s mom put it so well when she said that, on that day, her son was seen for who he is—a wrestler. His dignity as a person was lifted in victory, far above any of the differences in his abilities or attributes.

Dignity matters. Love matters. To Lucas, Kyle, James, Grant—and to us all.