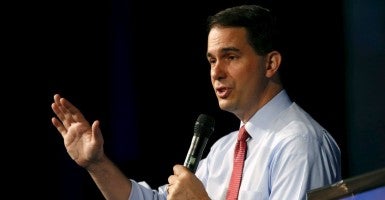 Walker, speaking at the RedState Gathering along with several other Republican presidential candidates, said that the Iranian nuclear agreement presents a great risk to the national security of the United States.

“Iran is not a place we should be doing business with,” Walker said.

He said should he become president, he will immediately “terminate” the deal with Iran and reinstate the economic sanctions against Tehran.

He advocated “lowering the tax burden” for individuals and employers.

He said he supports an “all of the above” approach to energy.

“We are an energy-rich country, we should start acting like it,” Walker said.

He also called for the next president to “speak out” about China’s human rights record.

.@ScottWalker: “Iran is not a place we should be doing business with.” #RSG15 pic.twitter.com/GTjTShJkxF