This Case Could Help Prevent Congress From Outsourcing Its Power 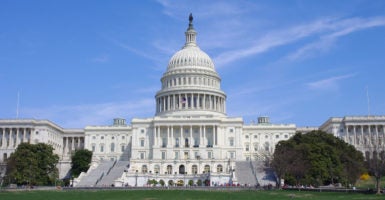 How much authority can Congress give to the attorney general to effectively write the criminal laws?

That’s a question the Supreme Court will address next term in a newly added case, Gundy v. United States. This case goes to the heart of the Constitution’s separation of powers and, specifically, how much Congress can pass the buck to the executive branch to make our nation’s laws. And that, in turn, is about safeguarding liberty.

In Gundy, the court will review Congress’ delegation of authority to the attorney general to decide whether and how to retroactively apply the Sex Offender Registration and Notification Act of 2006, also known as SORNA.

SORNA established a comprehensive system of registering sex offenders and requires offenders to register in every jurisdiction where they live, work, or go to school. It replaced a patchwork system at the state level that allowed convicted sex offenders to slip through the gaps in state sex offender registries when they crossed state lines.

This law has also helped the federal government monitor and track convicted sex offenders after they were released from prison.

But SORNA also delegated authority to the attorney general to determine how the law’s registration requirements would apply retroactively—that is, to sex offenders who had been convicted before SORNA became law in 2006.

Congress did not say how, when, or even if the attorney general should make that determination—one that can impose criminal liability on sex offenders who fail to comply.

The Gundy case focuses on whether that broad delegation of power is constitutionally permissible.

How Much of Its Power Can Congress Delegate?

Article I of the Constitution vests “All legislative Powers” in Congress. Thus, Congress is generally prohibited from delegating legislative functions to the executive branch.

In practice, however, Congress delegates quite a bit of authority to executive branch officials and administrative agencies. Despite the Constitution’s clear division of power, to date, the Supreme Court has struck down only two statutes as unconstitutional delegations of authority.

In Panama Refining Co. v. Ryan (1935) and Schechter Poultry Corp. v. United States (1935), the court struck down two New Deal-era laws dealing with regulation of the petroleum and poultry industries as unconstitutional delegations of authority to the executive branch.

Writing for the majority in Panama Refining Co., Chief Justice Charles Evan Hughes explained, “The question is not of the intrinsic importance of the particular statute before us, but of the constitutional processes of legislation which are an essential part of our system of government.”

In the last 80 years, however, the court has been unwilling to invoke this principle—known as the nondelegation doctrine—to strike down laws in which Congress surrendered its law-making power to agency officials. The court has instead found no violation, as long as Congress specifies an “intelligible principle” to guide the relevant agency or official in exercising discretion to make law.

In recent years, however, the court’s tendency to treat the nondelegation doctrine as a constitutional dead letter has troubled some of the justices.

In Reynolds v. United States (2012), the court held that  sex offenders convicted prior to SORNA’s enactment are not required to register before the attorney general has validly specified that SORNA’s registration provisions apply to them. Justices Antonin Scalia and Ruth Bader Ginsburg dissented, Scalia pointing out:

[I]t is not entirely clear to me that Congress can constitutionally leave it to the attorney general to decide—with no statutory standard whatever governing his discretion—whether a criminal statute will or will not apply to certain individuals. That seems to me sailing close to the wind with regard to the principle that legislative powers are nondelegable.

Three years later in Department of Transportation v. Association of American Railroads (2015), the court considered whether Amtrak is a private entity or a governmental one for purposes of issuing rules governing passenger train operations. The court openly skirted the nondelegation issue.

Justice Samuel Alito wrote a concurrence, noting the “reason why the Court does not enforce the nondelegation doctrine with more vigilance is that the other branches of government have vested powers of their own that can be used in ways that resemble lawmaking.”

We have overseen and sanctioned the growth of an administrative system that concentrates the power to make laws and the power to enforce them in the hands of a vast and unaccountable administrative apparatus that finds no comfortable home in our constitutional structure. The end result may be trains that run on time (although I doubt it), but the cost is to our Constitution and the individual liberty it protects.

When Justice Neil Gorsuch was on the 10th U.S. Circuit Court of Appeals, he dissented from the court’s denial of an en banc rehearing in United States v. Nichols, a case looking at the delegation issue under SORNA. Gorsuch wrote:

There’s ample evidence … that the framers of the Constitution thought the compartmentalization of legislative power not just a tool of good government or necessary to protect the authority of Congress from encroachment by the executive but essential to the preservation of the people’s liberty.

He continued, pointing out that unlike the Schechter chicken case of the 1930s, SORNA “doesn’t just grant some alphabet soup agency the power to write rules about the chicken trade. It invests in the nation’s chief prosecutor the authority to devise a criminal code governing a half-million people.”

Gorsuch noted that the statute lacks the kind of guidance for the executive agency or official that has led courts to approve of Congress handing legislative power over to the administrative state.

In the Gundy case, the Supreme Court has declined to hear three other questions presented by the sex offender who brought the case. The only issue on the table is whether SORNA’s delegation of power to the attorney general violates the Constitution.

That is a good sign that the court is ready to squarely address the delegation issue.

In fact, Gundy is the third case to come before the court since 2010 that deals with this regulatory scheme (the Reynolds case in 2012, and before that, Carr v. United States [2010], where the court held that sex offenders who travelled across state lines before SORNA took effect were not criminally liable for failing to follow its registration requirements).

But Gundy places the justices in between a rock (the nondelegation principle) and a hard place (the awful facts underlying this case).

There’s no denying that the criminal defendant in this case—a man who drugged and raped an 11-year-old girl—committed the kind of horrendous and predatory crime that illustrates why SORNA’s sex offender registration requirement is necessary for public safety. And if Supreme Court justices were to rule based on their personal feelings rather than based on what the Constitution requires, then he may well lose this case.

But as Scalia once said, “If you’re going to be a good and faithful judge, you have to resign yourself to the fact that you’re not always going to like the conclusions you reach. If you like them all the time, you’re probably doing something wrong.”

Judges are charged with interpreting the Constitution and its commands. If the court finds that Congress’ delegation of legislative authority to the attorney general under SORNA gives away too much discretion, and thus violates the nondelegation doctrine, then it should send Congress back to the drawing table.

If it so chooses, Congress can apply SORNA retroactively however it sees fit. In Gorsuch’s dissenting opinion in Nichols, he wrote that “[i]t’s easy to imagine all sorts of ways Congress might have constrained—and might still constrain—the attorney general’s discretion.”

Perhaps, if the Supreme Court has indeed taken this case to revive its traditional nondelegation doctrine, then Congress will soon have an opportunity to follow Gorsuch’s advice.