6 Key Exchanges From Major Union Case at the Supreme Court 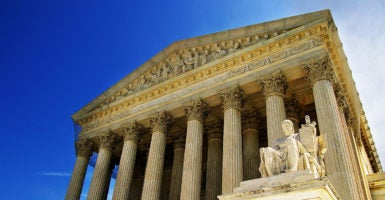 The Supreme Court heard oral arguments in Janus v. AFSCME on Monday, a case that could have major implications for the power of unions and worker rights. (Photo: zimmytws/Getty Images)

On Monday morning, the Supreme Court heard arguments in one of the most anticipated cases of the year, Janus v. American Federation of State, County, and Municipal Employees, Council 31.

This case involves forcing public employees who opt out of union membership to pay a fee for the “fair share” of costs associated with collective bargaining.

Mark Janus, an Illinois state employee, argues that forcing him to subsidize a union he has declined to join violates his free speech and free association rights. The court will look at whether to overturn its 1977 decision in Abood v. Detroit Board of Education, which held that public employees could be forced to pay an agency fee.

The court considered this very issue in 2016, but after the sudden death Justice Antonin Scalia, the justices deadlocked 4-4 in Friedrichs v. California Teachers Association, thereby upholding the lower court ruling in favor of the union. Now, agency fees are back at the court.

Bill Messenger from National Right to Work Foundation argued on behalf of Janus. He was first up to the podium, followed by Solicitor General Noel Francisco supporting Janus’ position. Then, Illinois Solicitor General David Franklin argued that the court should uphold Abood, and the union’s lawyer, David Frederick, argued last.

Here are a few exchanges from the oral argument.

1. How will this case affect the private sector?

Messenger explained that there is no state action in the case of employees of private companies, so striking down Abood wouldn’t impact private employers and unions. Francisco agreed that collective bargaining between a private employer and a union representing employees would not involve a state interest.

2. Why should unions represent “free riders”?

Justice Sonia Sotomayor brought up the fact that employees who opt out of union membership would still receive the benefits of collective bargaining without having to pay for them.

Messenger responded that these unions are required by law to represent non-members and members in the collective bargaining process. He also pointed out that unions benefit from being the exclusive representative, including enjoying additional government benefits like paid time off for conducting union business.

Francisco explained that in the federal government, unions are not permitted to charge non-members agency fees, but more than 1 in 4 federal employees still choose to join the union. Further, 27 states do not permit mandatory agency fees, and public unions still exist in those states.

3. What about reliance interests?

Justice Elena Kagan brought up the fact that before the Supreme Court will overrule a past decision, it considers several factors, such as the age of the decision, how much people have come to rely on it, and whether it has been reaffirmed over the years.

Abood was decided more than 40 years ago and, as Kagan noted, 23 states and the District of Columbia have laws that allow public unions to collect agency fees. Wouldn’t a ruling for Janus upset expectations in these states?

Messenger pointed out that most collective bargaining agreements expire after a few years, so any disruption would be short-lived. Francisco pointed out that current collective bargaining agreements were “negotiated under the shadow of Harris and Knox,” suggesting that the unions had plenty of notice that agency fees could be ruled unconstitutional in the near future.

4. Will this affect unions’ political influence?

After Messenger and Francisco concluded their arguments and the other side stepped up to the podium, Justice Anthony Kennedy began asking questions.

Justice Samuel Alito asked Illinois’ lawyer Franklin to explain why forcing Janus to subsidize speech he disagrees with should be treated differently from forcing him to speak. Franklin responded that the state had an interest in dealing with an exclusive representative and also imposed a legal duty of representation on that union, so the compelled agency fee served those interests.

But Alito put a finer point on it: He said that Sir Thomas More refused to take the oath of supremacy and paid for that refusal to speak with his life. Though Illinois and agency fees are clearly a far cry from King Henry VIII’s England, this demonstrated how serious some members of the court consider this impingement on free speech.

Kagan asked Franklin to elaborate on how ruling against Abood would affect unions, noting that Messenger and Francisco suggested the sky wouldn’t fall. Franklin asserted that unions would become “more militant and confrontational” without agency fees and that free-riding would become “endemic and contagious.”

Chief Justice John Roberts chimed in that perhaps it “will make unions more efficient and effective.” Frederick said that a ruling against the union would lead to labor unrest throughout the country.

During his brief rebuttal, Messenger said that the fact that unions might disrupt the government if the court rules against them is not a reason to rule for them.

Waiting for Gorsuch to Speak

All eyes were on Justice Neil Gorsuch during this oral argument, but the junior justice was uncharacteristically silent. The other eight justices had previously cast their votes on whether to overrule Abood. Gorsuch appeared to keep his cards close to the vest since he will likely be the deciding vote.

Now, we have to wait for that decision and see whether any of the other eight justices change their previous views. The court should issue its opinion in this important case by the end of June.