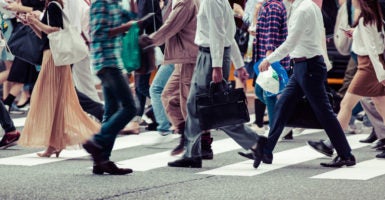 A majority of Americans now support the tax cuts passed by Republicans in Congress and signed into law by President Donald Trump at Christmastime, a new poll finds.

The survey results are part of a trending upswing in favorability for the tax cuts, including a Monmouth University survey that found support jumped from 26 percent in December to 44 percent in late January.

When Trump signed the Tax Cuts and Jobs Act into law, the tax reform package had 37 percent approval, the SurveyMonkey poll shows.

“Public opinion is moving in the direction of this bill,” Jon Cohen, chief research officer for SurveyMonkey, told The New York Times. “Considering where it was, it is dramatically different.”

In a related development, confidence among small businesses hit a record high, according to a separate survey by CNBC/SurveyMonkey.

“Everyone seems to be a little more upbeat,” Gina Coats, a project manager for a plumbing company in Springfield, Missouri, told the Times. “[The tax cut is] causing people to let go of their money a little more easily.”

Coats said she is using the extra money to get her roof fixed, a project that’s been on her to-do list for a while.