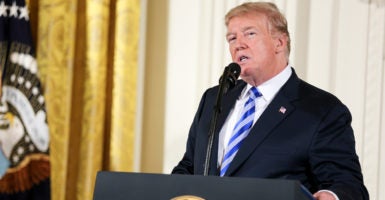 "We must do more to protect our children," President Donald Trump says during a Public Safety Medal of Valor awards ceremony Tuesday in the East Room of the White House. (Photo: Oliver Contreras/SIPA USA/Newscom)

President Donald Trump called for a ban Tuesday on devices that enable guns to fire more rounds more rapidly, one day before he was scheduled to meet with students and teachers from the high school in Parkland, Florida, where a rampaging former student shot and killed 17 and wounded 14 others.

“We must move past cliches and tired debates and focus on evidence-based solutions and security measures that actually work,” @POTUS says.

“I signed a memorandum directing the attorney general to propose regulations to ban all devices that turn legal weapons into machine guns,” Trump said, looking at Sessions. “I expect that these critical regulations will be finalized, Jeff, very soon.”

The National Rifle Association, the nation’s leading gun rights advocacy group, backed a ban on bump stocks after the Oct. 1 Las Vegas mass shooting, in which 58 people were fatally shot. The gunman, who killed himself, used a bump stock.

Such a device was not used in the Parkland school shooting, authorities said.

Some surviving students are helping organize a “March for Our Lives,” set for March 24 in Washington.

“We cannot merely take actions that make us feel like we are making a difference,” Trump said, adding:

We must actually make a difference. We must move past cliches and tired debates, and focus on evidence-based solutions and security measures that actually work to make it easier for men and women in law enforcement to protect our children and protect our safety.

The president, who on Friday visited a hospital that treated the shooting victims, made his remarks at a Public Safety Medal of Valor awards ceremony at the White House.

Trump was scheduled to host a listening session Wednesday with high school students and teachers from the Florida school, and from other schools that suffered similar attacks, such as Sandy Hook Elementary in Newtown, Connecticut.