Trump Has a New Plan to Save Money on Food Stamps 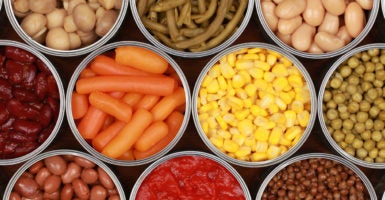 A new Trump administration plan would take half of the money people get from the Supplemental Nutrition Assistance Program and instead send families a box of hand-picked, nonperishable items. (Photo: Boarding1Now/Getty Images)

The Trump administration unveiled a new plan to revamp how people are receiving food stamps, suggesting that the government give them boxes of nonperishable food instead.

The new suggestion, written in the 2019 budget proposal, would take half of the money people get from the Supplemental Nutrition Assistance Program and instead send families a box of hand-picked, nonperishable items called “America’s Harvest Box,” reports Politico.

Office of Management and Budget Director Mick Mulvaney called the suggestion similar to the Blue Apron business, which sends prepared food and recipes to people’s doorsteps, adding that the government would be able to save billions of dollars on the America’s Harvest Box initiative.

“[The Department of Agriculture’s] America’s Harvest Box is a bold, innovative approach to providing nutritious food to people who need assistance feeding themselves and their families—and all of it is homegrown by American farmers and producers,” Agriculture Secretary Sonny Perdue said in a statement. “It maintains the same level of food value as SNAP participants currently receive, provides states flexibility in administering the program, and is responsible to the taxpayers.”

According to White House calculations, the government would save roughly $129 billion over the course of 10 years, though it  appears states would be responsible for having to ship and get the food boxes to the SNAP recipients.

“The projected savings does not include shipping door-to-door for all recipients,” USDA spokesman Tim Murtaugh said.

Some groups dedicated to fighting hunger and poverty have come out against the plan, expressing concern that the plan is “radical and risky,” while others said it could potentially “stigmatize” those on welfare.

“It could be something that [SNAP recipients] don’t even know how to make,” Miguelina Diaz, a member of Hunger Free America, told NPR. “We deal with different people of different backgrounds. Limiting them by providing them a staple box would limit the choices of food they can prepare for their families.”