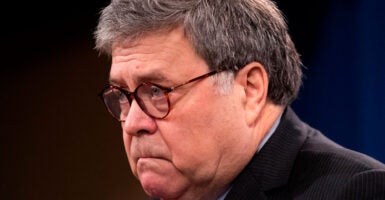 Former Attorney General William Barr accused President Donald Trump on Thursday of “orchestrating a mob” of his supporters to pressure Congress to overturn the presidential election.

In a statement to the Associated Press, Barr asserted that Trump’s actions to overturn the election were a “betrayal of his office and supporters.”

He further said that “orchestrating a mob to pressure Congress is inexcusable.”

On Wednesday, a group of Trump supporters breached the U.S. Capitol building in Washington, D.C., following a “Stop the Steal” rally, at which Trump claimed that he won the presidential election in a “landslide.”

The protesters, many of them carrying Trump flags, entered the Capitol as lawmakers were in the process of validating the results of the Electoral College.

One Trump supporter, Ashli Babbit, was fatally shot inside the Capitol. Three other people died from other medical issues, the Washington, D.C., police chief said. Fifty-two people were arrested, and 14 police officers were injured, according to the police chief.

Barr resigned from the Justice Department on Dec. 23 after a tense standoff with Trump over whether to investigate voter fraud in the election. Barr said in an interview on Dec. 1 that he did not see enough evidence to tilt the outcome of the election in Trump’s favor.

Barr came under intense scrutiny during much of his tenure from liberals who claimed that he acted more as Trump’s personal attorney than the top lawyer for the U.S. government.

Barr was a vocal proponent of the theory that the FBI and Justice Department under President Obama tried to take down Trump through investigations into possible collusion with Russia.

Barr tapped federal prosecutor John Durham in May 2019 to investigate the origins of the investigation into Trump. He declassified reams of documents that showed that the FBI provided misleading evidence to a federal surveillance court during its investigation of the Trump campaign.

Barr is one of several former high-ranking officials who have blasted Trump following the Capitol breach.

James Mattis, the former secretary of defense, said Wednesday that Trump “fomented” the onslaught, which he called “an effort to subjugate American democracy by mob rule.”