Democrats Are Arguing for Constitutional Right to a Tax Deduction. Here’s Why It’ll Fail. 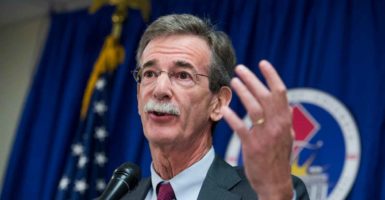 Gil Gatch is a member of the Young Leaders Program at The Heritage Foundation.

On Feb. 1, Maryland’s attorney general signaled his state will join with the coalition of New York, Connecticut, and New Jersey, whose Democratic governors have announced their intent to sue the federal government over a provision in the Republican tax bill, which they claim unconstitutionally targets blue states.

As many tax policy analysts and legal scholars have noted, the odds of success for such a lawsuit are incredibly low. But winning may not be their end goal—Democrats need to rouse their base by finding some way of opposing Republican legislation, even if that legislation will greatly benefit the majority of Americans.

Incredibly, the Democrats know that for this plan to gain momentum, they must argue that the law restricts states’ rights. That’s correct—Democrats are now championing states’ rights.

Unfortunately, their constitutional arguments are misguided and would defend hundred-billion-dollar tax breaks for the wealthiest taxpayers in high-tax states.

There Is No Constitutional Right to a Tax Deduction

Conservatives are traditionally staunch defenders of American federalism, a form of political organization in which power is shared between state governments and the central (“federal”) government, and each government is sovereign in its sphere of power.

Although Democrats have now latched onto this argument to claim Congress has little power to collect federal taxes in ways that might affect certain state policies, they have overlooked one little detail—the Constitution expressly empowers the federal government to collect federal taxes, and no power is reserved to individual states to dictate how the federal government ought to go about exercising this power.

As the Supreme Court explained in Edye v. Robertson (1884), this “uniformity clause” means that a particular tax “operates with the same force and effect in every place where the subject of it is found.”

A unanimous Supreme Court in United States v. Ptasynski (1983) concluded that the uniformity clause is satisfied by any tax that is defined in nongeographic terms. Thus, even if a particular tax imposes a bigger burden on some states—for example, a tax on oil refining income that would hit Alaska and Texas especially hard—it is constitutional, as long as it does not single out states by name for discrimination.

Until the 20th century, however, the federal government faced a practical obstacle to laying income taxes—the requirement in Article I, Section 9, Clause 4 of the Constitution that all income taxes be “apportioned” among the states according to their population.

Under apportionment, any federal income tax would have to impose a burden on each state according to its population as a proportion of the national total, without regard to its citizens’ relative wealth or income. Thus, for example, if State A had 2 million residents while State B had 1 million, State A’s residents would have to collectively pay twice as much in income tax as State B’s residents, regardless of their relative wealth and income.

The 16th Amendment to the Constitution, which became law in 1913, eliminated this problem by authorizing Congress to “lay and collect taxes on incomes, from whatever source derived, without apportionment among the several States.”

This means particular states, “blue” or otherwise, cannot validly object to a federal income tax because it “hits them harder” than other jurisdictions due to their many wealthy residents.

Such an argument, however, would also prove meritless.

First, strictly speaking, no one has a constitutional right to a tax deduction, which the Supreme Court has called a “legislative grace.” (New Colonial Ice Co. v. Helvering (1934)).

Further, the Supreme Court determined in South Carolina v. Baker (1988) that the 10th Amendment does not prohibit Congress from restructuring tax exemptions in ways that dramatically affect a state’s own policies.

In the 1980s, Congress changed the tax code to exempt only certain types of state and local government bonds from federal taxation. South Carolina argued that this violated the 10th Amendment by effectively requiring states to issue only registered bonds because issuing nonexempt bonds would be economically unfeasible. The state argued this was an unconstitutional interference with its reserved power to issue bonds however it deemed most prudent.

The Supreme Court upheld the limitation on this tax exemption, noting South Carolina was not deprived of its right to participate in the national political process, nor “singled out in such a way that it was politically isolated and powerless.”

The 10th Amendment did not authorize courts to second-guess whether limiting the exemption was sound tax policy or to judicially define certain spheres of state activity that the federal government could not impact when exercising its own constitutional power.

In other words, the Constitution empowers Congress to levy taxes however it deems fit, even if this influences state actions, as the Baker decision made clear. If South Carolina felt this was an unfair or bad policy, its senators and congressmen should have worked harder to convince their colleagues to enact congressional legislation more to their liking.

Contrary to claims by Democratic New York Gov. Andrew Cuomo, capping state and local tax deductions is not a spiteful attempt to harm left-leaning states. Rather, the deductions unfairly subsidize states like New York and protect the wealthiest of its citizens, at the expense of out-of-state federal taxpayers.

In fact, the tax break increases as the taxpayer’s income increases, because the wealthier taxpayer pays more in state and local taxes, and can therefore take a larger federal income tax deduction.

Second, a handful of a high-tax states receive a disproportionate amount of the benefits from state and local tax deductions, with just seven states—including New York—seeing over half of the national value from the tax.

Despite Cuomo’s protestation that this tax bill treats similarly situated states differently, nothing could be more erroneous than to say New York is similarly situated to low-tax states with regard to state tax policy. In fact, New York has thus far benefited from state and local tax deductions precisely because its tax policy is different than many other states.

Compared to their counterparts with identical incomes in high-tax states, they will pay $150,000 more in federal income tax while receiving the exact same services from the federal government. New York will receive a much larger amount of tax revenue from its taxpayers because of comparatively high tax rates, which it can only impose on its citizens at the expense of federal income taxpayers in Texas and Florida.

Capping the amount of state and local tax deductions does not “punish” high-tax states, but rather helps level the playing field by limiting the amount of tax burden that states like New York can shift from their own wealthy citizens to taxpayers in other states.

Not only is this a nonpartisan reason to cap state and local tax deductions, but it’s a very sound tax policy that helps lower tax rates across the board by limiting the extent to which the rest of the country is forced to subsidize a handful of states.

In sum, blue state efforts to use courts to block the new tax law’s limitation on the federal state and local tax deduction are bad for two reasons: they have no basis in law, and they seek to preserve unfair benefits for blue state residents.

The federal courts should quickly dispose of these frivolous “bad government” lawsuits.