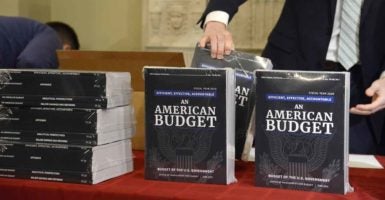 President Donald Trump's proposed budget for fiscal year 2019 would invest in the military, eliminate numerous agencies and programs, and begin the process of welfare and entitlement reform. (Photo: Mike Theiler/UPI/Newscom)

Congress must now do its job and build off the president’s budget and craft its own budget resolution.

In light of last week’s budget-busting deal, now more than ever it is crucial for Congress to pass a budget resolution and include reconciliation instructions that call for meaningful and permanent spending reforms. Lawmakers should incorporate the many positive reforms included in the president’s budget in crafting their proposal.

Here are five takeaways from the proposal:

The president’s 2019 budget calls for continued investment in national defense. The proposal provides more than $700 billion for defense in 2019 and over the next 10 years it would invest a total of nearly $7.5 trillion.

Last year, the president’s budget reached a balance of $16 billion by 2027. By contrast, the 2019 proposal never balances.

This is a stark departure from the past several Republican budget proposals. Since 2011, the House Budget Committee has put forth seven budget proposals, all of which balanced within 10 years. Cumulatively, the proposal would add more than $7 trillion to the national debt over the next 10 years.

Deficit reduction, tax reform, welfare and entitlement reform, and regulatory reform are critical for economic growth, but are only part of the picture. Unless Congress and the president reduce spending, the benefits of growth will not be fully realized.

3. Reduces the size and scope of the federal government.

The budget cuts more than $1.5 trillion in nondefense discretionary spending over the next 10 years. This represents a significant reduction to agencies and programs that are inefficient, ineffective, and are not constitutional responsibilities of the federal government. This includes eliminating numerous energy subsidies to the private sector, ineffective grant programs such as the Office of Community Oriented Policing Services, and Obama-era climate change funding.

It would also ban the use of Changes in Mandatory Programs. This is a commonly used budget gimmick that allows Congress to spend billions of additional dollars each year without any real savings and has been used to circumvent spending limits.

While the president’s approach to reducing the federal bureaucracy is appropriate, his signing of the latest budget deal raises questions about his level of commitment to smaller government.

The administration estimates that spending increases from the Bipartisan Budget Act would add nearly $700 billion to the already $7.1 trillion in additional debt that the country would accrue under this proposal.

The president’s budget would repeal and replace Obamacare, generating nearly $700 billion in health care savings over the next 10 years. On top of these savings, the proposal identifies another $278 billion in Medicare savings.

These are real cuts, many of which are based on existing bipartisan proposals. These have a strong chance to become law if lawmakers seize them for their budget to cut through reconciliation. Other savings proposals include reforming Social Security’s Disability Insurance program and the Supplemental Nutrition Assistance Program.

The fact that the president acknowledges that these programs are in need of reform is important. It is important, though, that the administration work with Congress to continue to develop these proposals.

Despite these high points, the budget does fall short in other areas. It fails to address Social Security’s Old-Age and Survivors Insurance program, which makes up the vast majority of Social Security costs. The program is unsustainable in its current form and will continue to eat up more of the overall budget if it is allowed to run growing cash deficits.

Like last year, the plan also calls for a federal paid family leave benefit, a new entitlement program that Congress should abstain from pursuing.

The budget would provide $200 billion in funding for the president’s infrastructure plan. According to the administration, this initial down payment would be used to spur at least $1.5 trillion in state, local, and private investment over the next 10 years.

The question is, is this federal investment really warranted? Data shows that only 9 percent of U.S. bridges are “structurally deficient,” less than half the number 25 years ago. Moreover, 93 percent of the nation’s roads are considered to be in fair or better condition, and the nation’s airports are moving more people more safely than ever before.

Instead of spending hundreds of billions of dollars on infrastructure projects, the federal government should focus on structural reforms and remove impediments that hamper infrastructure deployment.

Overall, the president’s proposal is a mixed bag.

The budget makes progress by investing in the military, eliminating numerous ineffective agencies and programs, and beginning the process of welfare and entitlement reform. However, the budget fails to ever balance, and does not sufficiently move the country away from its currently unsustainable fiscal path.

Last week, Congress and the president agreed to a plan that could add up to $2 trillion to the national debt. Congress must build off the president’s proposal and craft a budget that not only balances but puts forth reconciliation instructions to ensure that the budget is more than just a vision document, but actually turns reforms on paper into fiscal reality.

Continuing to put off necessary budget reforms is being fiscally reckless and undermines the American economy’s growth potential.