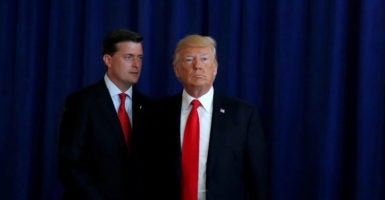 White House staff secretary Rob Porter resigned Tuesday after two of his ex-wives came forward accusing him of abuse while they were married to him.

Porter called the allegations “simply false” before thanking the president for the opportunity to serve in the White House and announcing he would be leaving, reports Axios.

“These outrageous allegations are simply false. I took the photos given to the media nearly 15 years ago and the reality behind them is nowhere close to what is being described. I have been transparent and truthful about these vile claims, but I will not further engage publicly with a coordinated smear campaign,” Porter said, adding he would be working as hard as possible to ensure a “smooth transition” as he leaves the White House.

Porter’s first wife, Colbie Holderness, accused the White House staff secretary of having been “verbally, emotionally, and physically abusive, and that is why I left” in an interview with the Daily Mail.

His second wife, Jennifer Willoughby, said he physically assaulted her during their marriage and she was constantly scared of his anger.

Press secretary Sarah Huckabee Sanders said during a White House press briefing that Porter decided to leave on his own and was not pressured to do so.