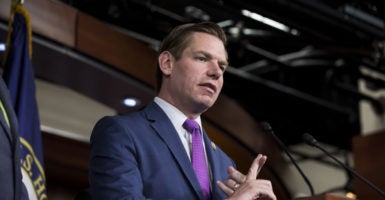 On Monday, Rep. Eric Swalwell, D-Calif., and several other Democratic congressmen introduced a bill in the House that they say is necessary to protect journalists from violent attacks caused by the Trump administration’s “toxic culture.”

The bill, called the Journalist Protection Act, would make it a federal crime to intentionally cause bodily harm to a journalist, either while the journalist is taking part in newsgathering, or with the purpose of intimidating or impeding the journalist’s newsgathering.

Swalwell says this measure “helps ensure law enforcement is able to punish those who interfere with newsgathering.”

His press release cited a U.S. Press Freedom Tracker statistic of 44 physical assaults on journalists in 2017, and blamed these assaults on President Donald Trump’s “antagonistic communications,” which allegedly “encourage others to think, regardless of their views, that violence against people engaged in journalism is more acceptable.”

There are several major problems with this bill, including the fact that it serves little practical purpose.

The general police power—that is, the broad authorization to enforce criminal law—is reserved to the individual states by the 10th Amendment. The federal government’s ability to enact and enforce criminal statutes is limited, and must be based on one or more of its enumerated powers.

For example, the Supreme Court in United States v. Lopez (1994) struck down a federal statute criminalizing the possession of firearms inside a school zone, because the statute did not require that the criminal act be in any way related to an enumerated power.

To avoid this scenario, the Journalist Protection Act’s scope is limited to those acts related to Congress’ commerce clause power: The assault is only prosecutable if it was committed by a person engaged in activity in or affecting interstate or foreign commerce.

It’s unclear how broadly a court might define what it means to affect interstate commerce in this context, and how greatly this requirement might limit the bill’s reach.

It’s also unclear how many listed attacks resulted in bodily harm, which at a minimum under the federal definition must include pain, cuts, bruises, or abrasions.

Overall, there’s no evidence of a gaping loophole in criminal law that allows people to get away with assaulting journalists. Despite Swalwell’s suggestion, state law enforcement officials are already fully capable of punishing those who cause bodily injury to another person.

And, based on the number of arrests and prosecutions stemming from the incidents listed by the U.S. Press Freedom Tracker, states are quite capable of and willing to prosecute attacks on journalists.

Every state has criminal statutes prohibiting assault and battery, and unlike the narrow protections the bill lays out for physical harm, state laws cover destruction of property, direct threats of imminent violence, and stalking.

This bill is also based on a complete mischaracterization of both the scope and the cause of violence against journalists.

As noted above, Swalwell cites the U.S. Press Freedom Tracker, which alleges there were 44 instances of physical attacks on journalists in 2017. Even a half-hearted attempt to investigate these numbers shows how deviously the facts behind them have been manipulated.

Thirteen of the “physical attacks” cited by U.S. Press Freedom Tracker are actually allegations of wrongful arrest or excessive force by police officers. These are not the scenarios envisioned by the average citizen hearing of a wave of violence against journalists.

Further, the bill would do nothing to protect a journalist from a genuinely wrongful arrest, because police officers are generally immune from criminal prosecution for acts committed during the course of their duty.

Of the remaining 32 incidents, there are several instances where the U.S. Press Freedom Tracker lists singular attacks on multiple, related journalists as separate, unique attacks. For example, it considers two different attacks to have occurred when the knife-wielding man threatened both a reporter and her camerawoman at the same time.

Taking these law enforcement-related and duplicative incidents into account, the number of “physical attacks” is not 44, but 27. Of those remaining incidents, only a handful appear to have resulted in bodily injury.

The U.S. Press Freedom Tracker does not have any data on attacks against journalists prior to 2017, making it impossible to compare even these manipulated numbers with those from other years in order to assess any trends. In other words, the number cited by Swalwell is meaningless from a statistical standpoint.

Even if the Journalist Protection Act is never enacted into law, it is shameful to wield manipulated, empty statistics in order to score political points.

It’s also irresponsible to suggest either that America is a dangerous place to be a journalist, or that Trump is responsible for this danger. And it is disrespectful of those journalists who are actually risking life, liberty, and property on a daily basis in order to report the news.

In 2017, approximately 70 journalists were killed worldwide and another 262 imprisoned in connection with their journalistic work. Not one of those deaths or imprisonments occurred in the United States.

While the president has occasionally spoken out harshly against the media, he has not deviated from previous administrations in his legal treatment of them. The press has not been restricted in any substantive way, and the First Amendment remains a shining example of liberty even as countries like France move to suppress anything the government deems “fake news.”

The federal criminal code is already dangerously broad and complex, and there is no need to add a toothless statute that duplicates vigorously enforced state laws and amounts to little more than political pandering. This is particularly so when, like the Journalist Protection Act, the statute is a solution in need of a problem.