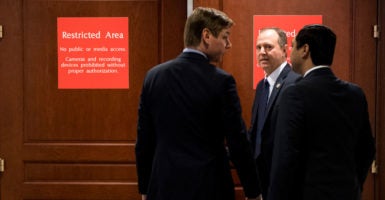 The House Permanent Select Committee on Intelligence voted unanimously Monday evening to release Democrats’ Foreign Intelligence Surveillance Act memo to the public, sending the document to the president to decide whether he wants to approve its release.

Republicans voted to declassify the Democrats’ memo, which reportedly weakens allegations made in the memo crafted by the intelligence committee’s chairman, Devin Nunes. The committee’s unanimous vote sends the Democrats’ memo to the White House, giving President Donald Trump five days to decide if he wants to declassify and release it to the American public, Politico reported.

While Trump has the power to block the memo from being released, the White House said it would “entertain” the possibility of approving its release.

The four-page Nunes memo, put forth Friday, alleged the Department of Justice and FBI made “material and relevant” omissions in applying for a Federal Intelligence Surveillance Act warrant. All Democrats on the House intelligence committee voted against releasing the Nunes memo.