The Inspiring Faith of the Eagles’ Comeback Quarterback 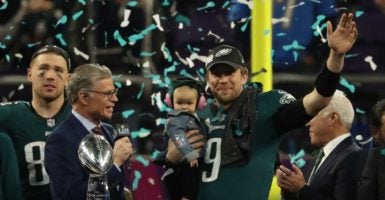 The National Football League has had a tumultuous season to say the least. Politics and sliding ratings have dogged the sport all year.

Despite the fact that this year’s Super Bowl was the lowest-rated game since 2010, it ended up being a great, high-scoring contest in which the underdog Philadelphia Eagles stunningly defeated the New England Patriots.

Perhaps just as surprising as the Eagles’ victory was a statement by Super Bowl MVP and Philadelphia quarterback Nick Foles. Before the game, Foles announced that he wanted to become a pastor after he retired from the NFL.

“I want to be a pastor in a high school,” Foles said at a news conference, according to the Associated Press. “It’s on my heart. I took a leap of faith last year and signed up to take classes at seminary. I wanted to continue to learn and challenge my faith. It’s a challenge because you are writing papers that are biblically correct. You want to impact people’s hearts.”

Foles is one of many vocal Christians in the Eagles locker room. In fact, after their Super Bowl victory, players and coaches knelt in prayer.

Not everyone has been happy about such public displays of religion from athletes.

University of Pennsylvania professor Jonathan Zimmerman wrote of what he sees as the troubling nature of Foles’ public religiosity at Philly.com: “We’re a hugely diverse country, composed of people who follow different faiths (or, increasingly, no faith at all). When it comes to sports, however, we tend to equate ‘religion’ with ‘Christian’—and with a born-again version of it, at that.”

Nevertheless, some fans have found this public expression of religious conviction to be refreshing.

Many took to Twitter to celebrate this after Foles’ Super Bowl victory.

Loved the game, loved the halftime show, and loved the Olympic ads, but the highlight of the #SuperBowl is Nick Foles https://t.co/QyuePXwrbB

A higher calling than the #SuperBowl? Definitely. Philadelphia @Eagles’ quarterback @NFoles_9 wants to be a high school pastor after football! He said it’s a leap of faith. https://t.co/S3mrdm0b2V

Serving something greater than self, this Eagle’s going to soar!
– Sarah Palin https://t.co/SD6LfbgUX7

Nick Foles wants to be a pastor.

It’s worth noting the remarkable story—and unusual path—that brought Foles to the height of sports achievement.

In fact, he nearly considered hanging up his cleats after the St. Louis Rams (now the Los Angeles Rams) cut him in 2016.

“I wanted to retire from the NFL, and I really struggled,” he said, according to The Washington Post. “I couldn’t pick up a football for about eight months. I had no love for the game, and it was tough.”

Foles explained that his faith led him to keep playing through hardship. He caught on with the Eagles as a backup to star quarterback Carson Wentz. When Wentz went down with a season-ending injury, Foles stepped into the starting role.

Many doubted that Foles could successfully lead a talented Eagles team through the playoffs, and some even called for the team to sign unemployed quarterback Colin Kaepernick.

Of course, Kaepernick sparked the NFL’s national anthem controversy in 2015 over what he said was the racism of the police in America. Kaepernick’s latest venture has been raising $20,000 for the daughters of Assata Shakur, who became renowned for killing a New Jersey police officer in the 1970s.

One Philadelphia columnist wrote after Wentz’s injury in December, “If, in this moment, you don’t want Kaepernick to wear an Eagles uniform because he kneels during the anthem, then you prefer hollow, misdirected patriotism to winning.”

Oops. It turns out Foles was a revelation as Kaepernick remained without a job.

Despite calls to switch to Kaepernick, the Eagles had faith in Foles and were rewarded with the first Super Bowl in the history of their franchise. And with all that’s happened in the NFL this season, it was a nice story to end with.