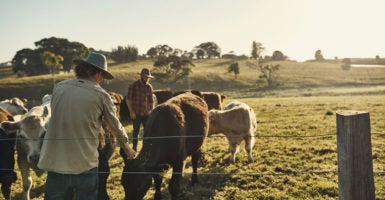 The current NAFTA renegotiations between the U.S., Canada, and Mexico have major implications for American farmers, ranchers, and consumers, as shown by a new Heritage Foundation report.

Agricultural trade in general is extremely important to the U.S. In 2016, agricultural exports totaled nearly $135 billion—more than three times the total in 1989.

For many American farmers and ranchers, exports are a necessity. They produce more than they can sell domestically.

Certain commodities are especially dependent on export markets. For example, exports accounted for over 70 percent of the volume for both cotton and tree nuts (mostly almonds), and over 50 percent for wheat and rice.

Exports are only half of the equation. Agricultural imports in 2016 reached a new high of $121 billion—a fivefold increase from 1989. Importing food supports lower prices, provides year-round product variety, and increases food choices.

>>> All 3 NAFTA Countries Have Gained in Prosperity Since 1994

The benefits of U.S. agricultural exports to Canada and Mexico are also spread across almost every state. The report also shows the importance of agricultural imports from Canada and Mexico:

In 2016, Mexico and Canada were the largest and second-largest agricultural importing countries for the U.S., respectively. There was a big difference compared to other countries: The third-largest importer was China, and its imports ($4.2 billion) were just one-fifth of Canada’s imports ($21.5 billion). The total imports from Mexico and Canada was greater than the next 16 countries combined.

Both countries provide American families with a wide variety of products, such as fruits and vegetables. In fact, both countries combined for an incredible 56 percent of the fruit and vegetable imports to the U.S in 2015.

As the NAFTA renegotiations proceed, U.S. trade negotiators should bear in mind how important agricultural trade with Canada and Mexico is for the U.S, as shown by the data.

NAFTA helped to free up trade between Canada, Mexico, and the U.S. If anything, renegotiations should only improve upon the agreement, not create unnecessary barriers.