New York Proposes Free College, but Not Everyone’s Buying It 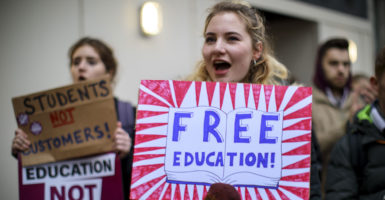 New York Gov. Andrew Cuomo announced an “aggressive” new plan to provide free college tuition to families earning up to $125,000 a year. Under the proposal, nearly a million families would qualify.

“We’re making college tuition-free for middle-class families,” Cuomo, a Democrat, said. “This is the most aggressive plan ever proposed.”

Richard Vedder, director of the Center for College Affordability and Productivity and a professor of economics at Ohio University, called the proposal “extortionately inappropriate.”

Cuomo is billing the proposal as “the first of its kind in the nation.” But while the plan appears to be the most far-reaching, it’s not the first time states have leveraged tax dollars to pay for at least some of their students’ college tuition. Oregon, Tennessee, Georgia, Michigan, and Louisiana have all done so in various forms, but not all of those programs have proven sustainable.

Louisiana, said Norbert Michel, an expert in financial regulations at The Heritage Foundation, provides a case study for why free tuition is “bad public policy.”

“It simply is not true that ‘everyone’ must have a college education,” Michel told The Daily Signal. “Pretending otherwise devalues the college degree, and it isn’t really free. Someone always ends up paying more for a college education when we pretend it’s free because we transfer tax dollars over to universities.”

Under the Louisiana college scholarship program, called the Taylor Opportunity Program for Students (TOPS), any student earning a 2.5 GPA or above who scores at or above the state average on the ACT or SAT is eligible for money to cover the full tuition of any public university in the state, despite how much or little their family earns. Scholarships can also be applied to private schools, although they won’t cover the full cost.

Last March, Louisiana Gov. John Bel Edwards, a Democrat, said due to a historic budget shortfall, the state no longer had adequate money to fund the program. According to CNN, more than half of Louisiana State University’s 26,000 undergraduates receive state-funded scholarships, totaling “about $58 million.”

From 2000 to 2010, Louisiana saw a 20 percent spike in the number of high school students who headed to college in one year. But in the wake of the budget shortfall, thousands of students received notifications last year that the scholarship program would only cover 42 percent of tuition costs for the spring 2017 semester.

To address the costs of college affordability, Vedder of the Center for College Affordability and Productivity said he’d “do nothing.”

“I think we’re over-invested in higher education,” he said. “But if you’re going to do something—and maybe there’s a political case for doing something—I would reduce subsidies to the state universities that are already being given, and convert that money to vouchers and give it to the low-income students.”

Cuomo’s Excelsior Scholarship program aims to provide free tuition to students from middle-class families making up to $125,000 per year, which according to the governor, accounts for 80 percent of New York households. He estimates the plan will cost approximately $163 million per year.

In creating the plan, Cuomo took a page from Sen. Bernie Sanders’ playbook. Sanders, an independent from Vermont, appeared alongside the governor on Tuesday at LaGuardia Community College to announce the new proposal.

“If the United States is to succeed in a highly competitive global economy, we need the best-educated workforce in the world,” said Sanders, who campaigned on the issue of free tuition while running for president. “We must make public colleges and universities tuition-free for the middle-class and working families of our country.”

Currently, the Tuition Assistance Program, or TAP, provides nearly $1 billion in grants to college students statewide and New York is one of only two states in the nation that offers this type of entitlement. Under the program, eligible students would still receive TAP and any applicable federal grants. Additional state funds would cover the remaining tuition costs for incoming or existing eligible students.

Cuomo’s proposal still needs approval from the state Legislature. He and Sanders are hopeful if the measure passes, other states will follow.

“Mark my words,” Sanders said. “If New York state does it this year, state after state will follow.”