Despite Hollywood’s Scorn, Melania Trump Has Accomplished Much as First Lady 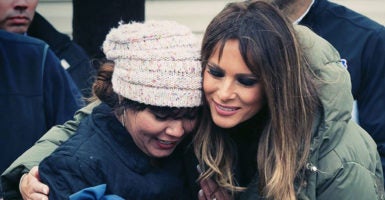 Actress Kristen Bell, who was hosting the event, joked about being a “first lady.”

“I think my first initiative as first lady will be cyberbullying,” Bell said to “much laughter” from the audience, according to the The Huffington Post. “Because I have yet to see any progress made on that problem quite yet.”

Melania Trump, of course, had said she wanted to work against cyberbullying while in the White House.

Unfortunately, Bell isn’t the only one missing—or choosing to overlook—the considerable achievements of Melania Trump and the other women in the Trump White House.

Women across the country marched for a variety of reasons Saturday, but a singularity was a particular dislike, even hatred, for President Donald Trump. To counteract that, the president took to Twitter to cite the incredible achievements that have helped women, noting in particular: “Lowest female unemployment in 18 years!”

Beautiful weather all over our great country, a perfect day for all Women to March. Get out there now to celebrate the historic milestones and unprecedented economic success and wealth creation that has taken place over the last 12 months. Lowest female unemployment in 18 years!

Not only have Trump’s policies benefited women, his administration is full of dynamic, intelligent, exceptional women in a variety of roles. They include Sarah Huckabee Sanders, Kellyanne Conway, Hope Hicks, and Nikki Haley, just to name a few.

To say the left portrays first lady Melania Trump unfairly is an understatement. She is frequently cast as a distant, one-dimensional woman plucked from an ivory tower and thrown into the White House unwillingly.

The opposite is true. The first lady has brought a remarkable degree of grace, dignity, and quiet strength to a position that, while unofficial, is steeped in tradition and significance for our country.

She is an extremely qualified and accomplished person on her own merits, and has expressed her delight and desire to serve in the capacity as first lady.

Here are the first lady’s top moments of her first year in the position:

Recently, the Office of the First Lady announced a series of staffing additions, including a director of policy, signaling a growing portfolio and comfort level in the position.

Though it’s a role that was not expected or perhaps even natural for her, Melania Trump has risen to the challenge. She is a first lady all Americans should be proud of and respect.