There Are 633 Key Administration Positions. Trump Hasn’t Appointed Nominees for 252 of Them. 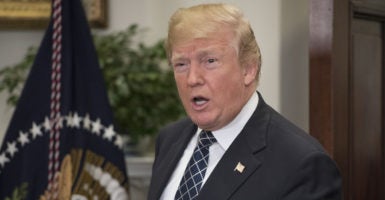 Just shy of one year in office, President Donald Trump has yet to fill more than one-third of key positions in the federal government—casting some doubt as to how quickly he will “drain the swamp” of the federal bureaucracy.

“This administration is about to enter the second quarter of the game, and many crucial players are either in the locker room or waiting to be recruited,” @RPublicService says.

As of Jan. 12, Trump hasn’t nominated people to fill key positions at the Justice Department, the Internal Revenue Service, State Department, and other bureaucracies, some of which he had stressed a desire to make major changes in. In many cases, that means career government employees from the Obama administration are filling the mid-level positions on an interim basis.

Trump has no nominee for 252 of the 633 key positions requiring Senate confirmation, according to the Partnership for Public Service, which tracks presidential appointments. That’s well behind every predecessor going back to at least President George H.W. Bush, each of whom had the bulk of nominees confirmed by this point in their administration, according to the organization.

The Senate, where the Democratic minority has held up many nominees, has confirmed 241 Trump nominees, while another 136 nominations are pending.

“President Trump has yet to fill key political policy and management jobs across the government, ranging from the IRS, to the Census Bureau and the Drug Enforcement Administration, to important diplomatic positions such as the ambassador to South Korea,” Max Stier, CEO of the Partnership for Public Service, told The Daily Signal in a statement.

“This administration is about to enter the second quarter of the game, and many crucial players are either in the locker room or waiting to be recruited,” Stier continued. “The absence of these political appointees certainly could handicap the president’s ability to provide effective services to the American people.”

In December, White House press secretary Sarah Huckabee Sanders responded to a question about the lack of appointments.

Look, we’ve been focused on filling positions as quickly as possible. But at the same time, the president has said before he doesn’t think that every single position in the government needs to be filled. He’s going to cut back on some of those positions. We’ve been focused on some of the top priority places and we’re going to continue filling out individuals. But, we’ve also seen a massive slowdown and obstruction by the Democrats. Hopefully, they’ll continue to push our people through, particularly in individuals that were held up, whether it’s in the judiciary or something that falls under the national defense profile.

The Partnership for Public Service’s tracker counts of Trump appointees are a subset of a broader set related to Trump’s historic counts. The numbers vary since some presidents had more open positions, while some had more holdovers. The tracker includes announcements, but historical and comparative numbers only include positions submitted to the Senate. Both measures exclude judiciary or holdover positions.

The only way to control the federal bureaucracy filled with career government employees is to name political appointees to set policy, said Robert Moffit, senior fellow of domestic policy studies at The Heritage Foundation.

Looking at the positions with no nominee, Moffit noted how many directly affect the president’s policy agenda. Trump hasn’t appointed a new IRS commissioner since John Koskinen’s controversial term expired last November. Further, Trump could appoint nine spots to the IRS Oversight Board, which is an internal watchdog of the tax collection agency, but the posts are still vacant.

Trump has not named an assistant secretary of labor for employment and training, which could tie in with his jobs agenda, Moffit noted. Meanwhile, as Trump talks about addressing the opioid crisis, there is no nominee for either the administrator of the Drug Enforcement Administration or a director of National Drug Control Policy.

A president risks giving up some of his leadership by not filling political positions, said Martha Kumar, director of the White House Transition Project.

“Trump has as one of his goals from the campaign the reduction of the size of government, so, for him, cutting back on the number of people there are in the campaign is a positive, no matter what those positions are,” Kumar told The Daily Signal.

“You need people in positions at the top of departments and agencies because career people are going to follow the lead of the politicals,” Kumar said. “That’s why you want to have the political positions filled and why you want to have them filled early so that you can make the most use you have in office of that four years. You don’t want to wait and start leading a department or agency two years in.”