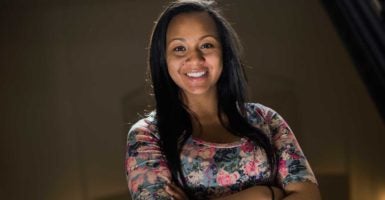 "I definitely think that we can do more and that’s kind of what the Black Republican Congressional Staff Association is doing on the public sector side,” Ayshia Connors says. (Photo: Tom Williams/CQ Roll Call/Newscom)

It’s pretty easy to name a couple of black women working in progressive circles and organizations, but it’s a lot harder to name the ones working within the conservative movement.

There’s a substantial national conversation about progressive black women like Tamika D. Mallory, an organizer of the Women’s March; or Alicia Garza, a queer black woman who founded Black Lives Matter, who brought police brutality to the forefront of America; or Tarana Burke, who first created the #MeToo campaign that launched a conversation about the sexual harassment women face daily.

What’s less discussed are the young conservative, black women who are working every day to change and influence the Republican Party.

These women want to bring home a message of empowerment, not only to black women across the country, but also to the black community at large. Women such as Antonia Okafor, the founder of gun rights advocacy organization EmPOWERed, Ayshia Connors, a senior policy adviser to a Pennsylvania congressman and president of the Black Republican Congressional Staff Association, and Candace Owens, the director of Urban Engagement for Turning Point USA, all work tirelessly in advocating for their community and to make black conservative voices heard.

“Essentially, I believe in this day and age, for whatever reason, there is a largely ignored, growing group of voices, which is essentially black conservatives. We’ve been largely dismissed and de-legitimized in the media as something that is not allowed to exist,” Owens, who labels herself an independent thinker, told The Daily Caller News Foundation.

Okafor and Connors are also trying to make big strides within the conservative movement.

“I’m spreading the message of female empowerment through gun ownership, one that transcends all races,” Okafor said of her focus on her EmPOWERed college tour.

Connors, as the president of the Black Republican Congressional Staff Association, has not only doubled the number of members since she entered, but is also intent on using the organization to help young black Republicans and conservatives find jobs on Capitol Hill. Before joining as Pennsylvania GOP Rep. Brian Fitzpatrick’s senior policy adviser, Connors worked with the Republican National Committee during the 2016 election.

Okafor is currently on her EmPOWERed tour, visiting college campuses to talk about female empowerment through gun ownership, a message not only for black women, but women of all races. Her tour includes stops at historically black colleges such as Howard University and Spelman College, where she hopes the face-to-face interaction with students will open their eyes.

“I think that what I hope to gain is that they see I am a person, a human being, and I’m like them,” Okafor told The Daily Caller News Foundation. “I’m doing it because I want to empower the black community. I came out of being a closeted conservative and I’m vocal because when other people can see that there is someone else who looks like them and believes like them, unlike what society tells them to be like, it gives them courage.”

What many people don’t know is American history is a rich history with black women being unashamed of having conservative values.

There was Mildred Fay Jefferson, a pro-life activist, who was the first black woman to graduate from Harvard Medical School, as well as Constance Berry Newman, a former assistant secretary ofsState for African affairs under President George W. Bush’s administration. Also, Ida B. Wells, a founding member of the National Association for the Advancement of Colored People, fought against the lynching of black people in America.

There’s still a lot more work that needs to be done, according to the women The Daily Caller News Foundation spoke to. They noted the GOP should work on messaging and how the party conveys their values to the black community should they wish to be successful with minorities in the future.

“A lot of the times when they have good ideas, they have trouble communicating them in a way that seems attainable,” Owens, also a vlogger, said, adding that the GOP should develop a sense of humor. “I think they just need a lot more personality.”

Connors also agreed that the Republican Party needs to work on messaging, but also how it explains those ideas to the black community. Most black Americans are naturally conservative and receptive to a message that centers around education leading to upward mobility. Criminal justice reform, often advocated by Sens. Tim Scott, R-S.C., and Rand Paul, R-Ky., also needs to pushed to the forefront, Connors said.

Connors suggested making access for young people who want to serve on Capitol Hill but may not have the resources to do so is crucial.

Okafor emphasized face-to-face interactions with people, saying the only way there can be a huge shift is if people talk one-on-one. She pointed to Paul’s actions when he visited Howard University in 2015. Too often Republicans only enter the black community during an election cycle. Paul entered a black space and spoke to them about his conservative values, but focused on issues that resonated with the black community, Okafor said.

“He talked about criminal justice reform, he talked about economic empowerment zones, he talked about school choice,” Okafor said. “Those are thing that African-Americans have been wanting as a percentage to do something about but they only go to progressive policies because we haven’t done much to bring the message home that our conservative values actually do empower them in those problems.”

The GOP is often quick to dismiss diversity efforts and it shows in numbers—7 percent of the black community identifies as Republican and recent GOP presidential candidates have received between 8 to 9 percent of the black vote in recent elections. This leads to the question: Should the GOP focus on diversity?

Connors gave an empathetic yes, but also pointed out the GOP often doesn’t get enough credit for its efforts with minority outreach. Owens doesn’t care about the color of someone’s skin, but said she’s more concerned with the results they achieve for the black community.

“But I definitely think that we can do more and that’s kind of what the Black Republican Congressional Staff Association is doing on the public sector side,” Connors said. “They do a lot with trying to bring in diversity and trying to create space for people to be involved with the party, whether that is employment or deploying people out for campaigns or getting people involved in policy discussions.”

The Republican National Committee did not return The Daily Caller News Foundation’s request for comment in time for publication.