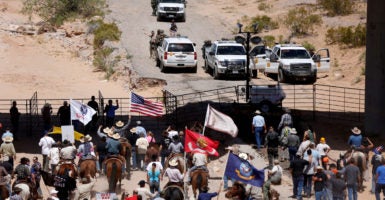 Protesters gather at the Bureau of Land Management's base camp at the Bundy ranch in 2014. (Photo: Jim Urquhart/Reuters/Newscom)

Governments are prone to abuse, especially when unchecked.

Recently revealed actions by the Bureau of Land Management, a federal agency under the Department of Interior charged with managing federal land, are reminiscent of the IRS scandal in which that agency targeted conservative tea party groups for extra scrutiny.

A federal judge ruled Dec. 20 that she was throwing out the Bureau of Land Management’s case against Nevada rancher Cliven Bundy because the prosecution withheld key facts.

On Monday, the same judge ruled that the case could not be tried again due to the actions of the prosecution, which she said had been “outrageous” and “violated due process rights,” according to azcentral.com.

The story broke before Christmas, but hasn’t received the attention it deserves. It perfectly underscores the pernicious problem of unaccountable agencies and how quickly they can become abusive to citizens.

The trial involved a dispute over grazing rights between Bundy and the federal government, a persistent problem in western states.

The government claimed Bundy owed money for public land use fees going back to the early 1990s, which the Bundy family refused to pay.

After years of trying to recoup the fees, the Bureau of Land Management, working in conjunction with the FBI, tried to impound Bundy’s cattle in 2014.

The story hit national headlines after Bundy, his family, and supporters got into an armed standoff with authorities that fortunately ended without violence. Bundy and his sons Ammon and Ryan eventually were arrested and charged with various offences.

However, the actions of government agents badly damaged the credibility of the case and raised questions about the power of supposedly independent agencies to deliver justice responsibly.

What is particularly worrisome is that the Bureau of Land Management appears to have acted punitively against political and religious groups they simply didn’t like.

The level of malfeasance of which one of its own accused the Bureau of Land Management is stunning.

Dan Love, the Bureau of Land Management law enforcement officer who led the 2014 raid on the Bundy compound in Clark County, Nevada, was fired recently amid charges of corruption. That was something prosecutors denied until pressured to release his fellow agent’s report to the defense.

Worse, an investigative report by one of the bureau’s own special agents revealed that the agents in the Bundy case acted with “incredible bias” and likely broke the law, as The Daily Caller News Foundation reported.

In the memo, lead investigator Larry Wooten explained how agents acted maliciously toward the Bundys. He said the “punitive” and “ego-driven” campaign against the ranchers was all an effort to “command the most intrusive, oppressive, large scale, and militaristic trespass cattle impound possible.”

Wooten wrote: “The ridiculousness of the conduct, unprofessional amateurish carnival atmosphere, openly made statements, and electronic communications tended to mitigate the defendant’s culpability and cast a shadow of a doubt of inexcusable bias, unprofessionalism, and embarrassment of our agency.”

The agents called Bundy and his supporters “deplorables,” “rednecks,” and “idiots” among many other worse names, Wooten said. They also insulted the Bundy family’s Mormon beliefs.

Their behavior showed clear prejudice toward “the defendants, their supporters, and Mormons,” Wooten wrote.

Wooten claimed that fellow agents put him through a “religious test” of sorts on several occasions.

Wooten’s memo suggested that the attitude and ambition of Bureau of Land Management agents led them to inappropriately militarize the operation against the Bundys, even after the FBI had conducted a threat assessment and concluded that the Bundys weren’t dangerous.

The day after U.S. District Court Judge Gloria Navarro’s declaration of a mistrial, U.S. Attorney General Jeff Sessions called for an investigation into the matter.

However, there is some frustration over the Navarro’s decision, especially among environmental groups that generally would like to boot ranchers from government-owned western land.

“These federal agencies have been patient and cautious to a fault in their prosecution of the Bundys and their accomplices,” Molvar wrote. “It’s long past time to stop playing games with the prosecution of federal crimes, and instead lay all the facts on the table and let the judicial system work.”

But one doesn’t need to think the Bundys acted appropriately in the dispute to understand why the case had to be thrown out. Nor is it out of line to think it’s worrisome for government agents to act in such an aggressive and abusive manner no matter the guilt or innocence of the citizen.

As columnist Debra Saunders wrote, the disturbing facts that have come to light point “to the sort of federal prosecutorial abuses that give the right cause for paranoia.”

There are better ways of dealing with Western land. Reducing the federal footprint would certainly help.

Ranchers have been using government land for grazing for many generations, as individuals generally don’t have the financial means to acquire the amount of property necessary to run their business.

But this setup is not a free ride or “welfare,” as some have suggested.

Studies show it is generally more expensive for ranchers to use public land, which, in addition to fees, they are required to maintain, than to use privately leased land. In fact this land use helps the government save a significant amount of money on management costs.

Many ranchers would much rather contract with private entities and pay for services rather than deal with the headache of negotiating with the federal government. In many cases, however, this is impossible.

In Nevada, the federal government owns over 80 percent of the land and creates serious problems for ranchers and others who want and need to use it.

In the past, the federal government was more likely to give ranchers freer use of this land. Government actually encouraged western migration and frontier settlement through policies such as the famed Homestead Act of 1862.

But pressure from environmentalists outside and inside the agencies during the 20th century led to more restrictive policies on how ranchers may use the land.

This resulted in confrontations between the federal government and western farmers and ranchers, most notably the so-called “Sagebrush Rebellion” in the 1970s and 1980s, in which a coalition of westerners demanded that the government privatize land or transfer it to local authorities.

Confrontations and tension between ranchers and the Bureau of Land Management will likely continue as long as the government pursues such tight-fisted policies and insists that it’s more important to close off land use for the needs of the desert tortoise rather than those of ranchers and farmers.

Regardless of policy, Americans have a right not to be targeted by a government created to protect them and mete out appropriate justice.

The unfortunate facts of the Bundy case show how an unaccountable agency can become abusive toward citizens, and strikes at the heart of what we believe about republican government.

The Founders created our institutions to serve us and faithfully uphold the law, not be weaponized to attack individuals and groups in the shadow of darkness.