What’s Next for Iran After Protests? 4 Elements to Watch 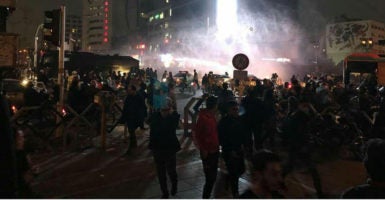 After backing the protesters standing up to the Iranian dictatorship, President Donald Trump will decide next week on whether to again waive sanctions—part of the Obama-era nuclear deal he has long criticized.

“In terms of signing a waiver later in January, the president hasn’t made a final decision on that,” @PressSec says.

The peaceful uprising, which began in late December in the city of Mashhad, has spread to cities such as Tehran, Qom, and Shiraz.

The protesters objected to the Iranian government concentrating much of the windfall from the $100 billion in unfrozen Iranian assets—resulting from the U.S.-led multilateral nuclear deal—to expand regional influence in the Middle East instead of dealing with domestic economic problems. Among the reported chants was “Leave Syria, think of us.”

Here’s what experts say could be next as the Iran drama unfolds.

“Trump and Pence have been very good with rhetoric in comparison with the failed Obama approach of saying nothing in 2009,” Michael Makovsky, president of the Jewish Institute for National Security of America, told The Daily Signal.

That doesn’t mean combat boots on the ground, Makovsky said. Rather, it means providing money, advisers, and perhaps even weapons to groups opposing Iranian expansion in the Middle East. He added that the U.S. should push for a “loose confederation” of groups to make up a government in Syria—replacing the Bashar Assad regime being buttressed by Iran.

“The Reagan doctrine was about supporting anti-communist forces,” Makovsky said. “The Trump administration should take a page from Reagan’s book about raising the cost of Soviet expansionism.”

Other experts are more cautious about direct involvement, but all agree on the need to increase dissent internally in Iran against the ruling Islamic regime.

Even as the Iranian regime seeks to block social media, the U.S. government should continue promoting their message on Radio FARDA, said Jim Phillips, senior research fellow for Middle Eastern affairs at The Heritage Foundation. Radio FARDA is the Iranian branch of the U.S. government’s Radio Free Europe, which was used to help fight Soviet Union censorship during the Cold War. It broadcasts from the Czech Republic.

Phillips said the U.S. should also impose more sanctions on the Iran Revolutionary Guard Corps, the elite division of the military charged with protecting the Islamic Republic system and carrying some political power.

The protests prompt speculation about whether this is the beginning of the end of the government’s rule that first began with the Islamic revolution in 1979. That’s not yet likely, Phillips said.

“I doubt the regime will crumble from this protest but it will weaken the foundations of the regime,” Phillips told The Daily Signal. Noting the failure of the larger 2009 protest, he added, “Unless there is a big increase in the number, it’s not likely to succeed.”

The government crushed student demonstrations calling for freedom in 2003. After a disputed presidential election, the even larger “green movement” began in 2009, with protesters demanding free and fair elections.

Still, the new protests have another dimension missing from the previous protests that involved mostly young, urban, and educated Iranians.

Eventually, the government is doomed, but the timing is unpredictable, Phillips said, drawing a historical parallel.

“With the Soviet Union, once the people’s loyalty to an idea was shattered, the government had to fall back on coerced repression,” Phillips said. “When that happens, a regime’s days are numbered. I just don’t know the number.”

3. What Happens to the Obama-era Nuclear Deal?

The 2015 U.S.-led multilateral nuclear deal with Iran lifted sanctions on the regime in exchange for a temporary halt in development of nuclear weapons. The Joint Comprehensive Plan of Action, or JCPOA, included Britain, Russia, China, France, and Germany.

In October, Trump announced the United States would not exit the deal entirely, but would decertify it under the terms of the Iran Nuclear Agreement Review Act, or INARA, by asserting the deal isn’t in America’s best interest.

While the Iran deal was never a treaty ratified by the Senate, critics say the 2015 INARA law, sponsored by Sen. Bob Corker, R-Tenn., helped codify in a congressionally-passed law that would otherwise be an executive action easily overturned by a future president.

Next week, by Jan. 12, Trump must decide whether to renew temporary waivers to U.S. sanctions against Iran—waivers he has previously issued.

White House press secretary Sarah Huckabee Sanders was unclear about the president’s intentions when asked about the waivers on Jan. 2.

“We certainly keep our options open in terms of sanctions,” Sanders said. “In terms of signing a waiver later in January, the president hasn’t made a final decision on that, and he’s going to keep all of his options on the table in that regard.”

More than likely, Trump will continue the waivers, said Behnam Ben Taleblu, senior Iran analyst for the Foundation for Defense of Democracies.

“This [support for the protesters] should not be mixed with a debate about pulling out of the Iran nuclear deal,” Taleblu told The Daily Signal. “The decision on granting another waiver comes up next week. I expect he will waive. Even before the nuclear deal, the U.S. could impose non-nuclear sanctions. They can continue non-nuclear sanctions now.”

With that waiver should come action from both Trump and Congress, Taleblu said. He said Trump must continue to show the will to support protesters, call for Congress to make changes to INARA to make it stronger, and put pressure on European allies to demand that Iran change its behavior.

4. Will the Global Response Change?

Many experts agreed the bulk of European allies and the United Nations offered a muted response, even as the United States, Israel, Saudi Arabia, and Canada have criticized the Iranian regime.

“Europeans are trailing far behind because they are less concerned about security and ideas and more concerned about business and commercial interests,” Taleblu said. “Canada has been more responsive than Europe.”

Canadian Foreign Affairs Minister Chrystia Freeland said this week, “Canada will continue to support the fundamental rights of the Iranians, including freedom of expression.”

French President Emmanuel Macron called for the Iranian government to show restraint against protesters, but later followed up with comments accusing the governments of the United States, Saudi Arabia, and Israel with using rhetoric that “would lead us to war.”

France at least seems to be saying more than most European allied, Phillips said. He said U.S. leadership is likely needed.

“Washington needs to do more to pressure Europe. Most of Europe has glossed over the Iran regime’s abuses and concentrated on commercial priorities,” said Phillips. “Europeans operate under the misconception that trade will help open up the country, but it won’t evolve into a European-style democracy.”