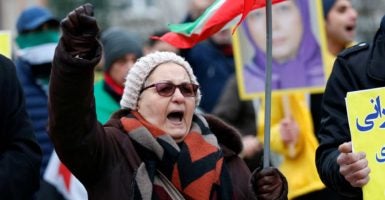 Opponents of Iranian President Hassan Rouhani protest outside the European Union Council in Brussels, as Iran has been rocked by discontent over the regime's policies. (Photo: Francois Lenoir/Reuters/Newscom)

Dramatic images of the protests rocking Iran should be a reminder of how good we have it in the United States and how easy it is to lose perspective.

In America, a “war on women” is defined by progressives as failing to force nuns to pay for birth control. In Iran, a woman can be punished for not wearing a hijab and a man can be brutally executed for being gay.

While the left has a penchant for accusing America of oppression while excusing foreign malfeasance, its refusal to criticize Iran still stands out.

CNN oddly defined the movement as “pro-government protests,” before issuing a correction.

The New York Times’ Tehran bureau chief, Thomas Erdbrink, reported on New Year’s Day that the protests were ongoing as the Iranian people “ignored calls for calm,” as if the movement were driven simply by a few rowdy troublemakers instead of having larger political implications for a tyrannical government.

Iranian authorities have clamped down on Tehran after demonstrators across the country ignored calls for calm https://t.co/M9G7x8lvAT

Many have compared Erdbrink’s reporting to the actions of the Times’ infamous Moscow bureau chief, Walter Duranty, who denied the communists’ forced famine in Ukraine in the 1930s that killed millions of people.

After this week of nonstop pro-regime propaganda, it's settled. @ThomasErdbrink will be remembered as the progeny of Walter Duranty. One hopes the regime he props up will meet the same fate as the Soviet Union, too.https://t.co/wefdz58qOP

In November, Erdbrink reported that Iranians had “united” in opposition to Trump and Saudi Arabia.

While the nature of the decentralized group of protests remains somewhat clouded, Jim Phillips, Heritage Foundation senior research fellow for Middle Eastern affairs, explained in The Daily Signal how continuing corruption under Iranian President Hassan Rouhani, a sudden surge in food prices, and importantly, the repressive Islamist ideology of the powers that be, have contributed to the toxic stew of resentment.

“We don’t want an Islamic Republic,” “Down with Hezbollah,” and “Death to the dictator” are reportedly common chants by protesters.

The fact is that there is deep discontent with the Islamist theocracy that has ruled the country since the 1979 revolution and many are now willing to risk their lives to end its abuses. The nation’s rulers are hardly pro-Western moderates.

Rouhani’s faction is more pragmatic than the ultra-hardliners, but it is by no means ‘moderate.’ Rouhani is the tactful leader of the Iranian state, but Ayatollah Ali Khamenei, Iran’s supreme leader, remains the implacable spearhead of Iran’s Islamist revolution. The two have worked closely for years and continue to collaborate as a ‘good cop/bad cop’ tag team.

For a media that likes to perceive itself as speaking truth to power, coverage has been strangely tepid as it continues to define the government as a moderating force compared to more dangerous hard-liners. It has also danced around the Iranian government’s role in perpetuating Islamist doctrines, both at home and abroad.

This is par for the course.

The rest of the media collectively yawned last month when a bombshell Politico report claimed the Obama administration put the lid on an investigation into Iran-backed Hezbollah’s drug-trafficking and terrorism activities during the nuclear deal negotiations.

So why is it that the media is ignoring this ongoing story and skating around the facts?

Conservative writer Lee Smith answered that question in Tablet magazine, writing that the nature of their reporting derives from two main sources of information: “the Islamic Republic of Iran, and the Obama White House.”

“Without government minders providing them with story-lines and experts, American reporters are simply lost—and it shows,” Smith wrote.

President Donald Trump was quick to tweet about the protests and explicitly call out the Iranian regime’s repressive and destructive policies.

Iran is failing at every level despite the terrible deal made with them by the Obama Administration. The great Iranian people have been repressed for many years. They are hungry for food & for freedom. Along with human rights, the wealth of Iran is being looted. TIME FOR CHANGE!

The people of Iran are finally acting against the brutal and corrupt Iranian regime. All of the money that President Obama so foolishly gave them went into terrorism and into their “pockets.” The people have little food, big inflation and no human rights. The U.S. is watching!

This contrasted sharply with then-President Barack Obama’s reaction to the wave of Iranian unrest that sprung up after a disputed election in 2009.

Obama initially said he was “troubled” by the turmoil, but ultimately hoped that Iran would sort things out. He refrained from explicitly condemning the regime and made no signal that he would support protesters, even rhetorically.

The legacy media still closely follows the message peddled by Obama and his former deputy national security adviser, Ben Rhodes, who was one of the chief architects of the Iran nuclear deal.

To lay the groundwork for the deal, Rhodes, whose background was in fiction writing, proudly boasted of manipulating clueless media allies in a 2016 profile of his work in The New York Times Magazine.

“We created an echo chamber,” Rhodes said in the profile. “They [the media] were saying things that validated what we had given them to say.”

Changing the negative public perception of Iran was a tall order. Not too long before, the George W. Bush administration had labeled the country, a long-term thorn in U.S. Middle East policy, as part of the “axis of evil” along with North Korea and Iraq.

To get Americans and Congress on board with this shift in strategy, the Obama administration had to convince them that loosening up sanctions on Iran was a good thing because Rouhani was a “moderate.”

Normalizing the regime provided a chance to cool its nuclear aspirations, so the reasoning went.

This was a farce that the media ate up and still continues to peddle.

One doesn’t want to fall too much into the trap of thinking all populist, democratic movements, even ones under tyrannical governments, are good.

But it is important, when the time is right, for American leaders to forcefully rebuke tyranny and repression.

Right now, the media is too worried about Trump’s blocking people from his personal Twitter account and protecting Obama’s legacy to bother uncovering the truly heinous policies and ideology of a cruel Iranian regime.