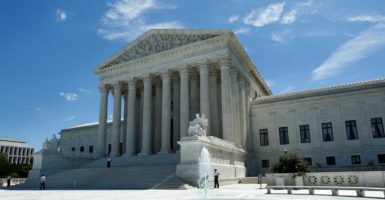 Although the Supreme Court has removed (for now) one unnecessary burden to elimination of DACA, the final judicial word has not been said. (Photo: Yuri Gripas/Reuters/Newscom)

On Dec. 20, in an unsigned, four-page opinion, the Supreme Court struck down a lower court order that severely burdened efforts by the Trump administration to end the Obama administration’s Deferred Action for Childhood Arrivals program, which has shielded certain younger illegal aliens from deportation.

This is good news, a helpful sign that the Supreme Court will not give unelected judges carte blanche to hamstring the federal government’s legitimate efforts to enforce immigration law restrictions, consistent with the current statutory law.

Continuation of DACA offends the rule of law. As Heritage Foundation scholar Hans von Spakovsky has explained, DACA should be eliminated as a matter of law:  “Why? Because the president doesn’t have the authority to decide who should be in the United States legally when it comes to immigrants. That power resides entirely in Congress [because] . . . the Constitution says it.”

In short, allowing a category of illegal aliens not to be deported requires an act of Congress, not an arbitrary presidential decision.

DACA was established in 2012 by a Department of Homeland Security memorandum. It applied to a large number of young illegal aliens who met certain conditions: they illegally entered the U.S. before the age of 16; were under the age of 31; had “continuously” resided in the U.S. since June 15, 2007; and were in school, graduated, or honorably discharged from the military.

DACA provided a period of deferred action (a promise that the alien would not be deported) as well as access to certain government benefits (including work authorizations, Medicare, Social Security, and the earned income tax credit). The period of deferred action was initially for two years, but that period was extended to three years by a second DHS memorandum on Nov. 14, 2014.

The Trump administration took a different approach. On Sept. 5, then-acting DHS Secretary Elaine Duke issued a new memorandum terminating the DACA program and all benefits provided under it effective March 18, 2018, unless President Donald Trump provides another extension of the program or Congress passes a bill addressing the issue.

The acting secretary stated that her determination was based in part on the attorney general’s conclusion that DACA was unlawful and likely would be enjoined in potentially imminent litigation.

Shortly thereafter, the administration found itself in a legal battle. Five related lawsuits challenging the acting secretary’s Sept. 5 determination were filed in a federal district lower court in California. The suits argued that the determination violated the Administrative Procedure Act (which governs the way in which federal administrative agencies may propose and establish regulations), and denied affected aliens due process and equal protection under the law.

On Oct. 17, the district court issued an order accepting plaintiffs’ contention that the 256-page record DHS used to support its Sept. 5 determination was “incomplete.” In so doing, the court imposed an enormous burden on the government, ordering it to turn over all “emails, letters, memoranda, notes, media items, opinions and other materials” that fell into several broad categories.

The Justice Department unsuccessfully challenged this ruling before the largely liberal 9th U.S. Circuit Court of Appeals, and then appealed to the Supreme Court.

In its short unsigned opinion, the Supreme Court held that, before imposing its heavy-handed documentary request, the district court first should have ruled on the government’s two “serious” threshold arguments—that the decision to terminate DACA was unreviewable under the Administrative Procedure Act because it was “committed to agency discretion,” and that the Immigration and Nationality Act deprived the lower court of jurisdiction.

As the court explained, “[e]ither of those arguments, if accepted, likely would eliminate the need for the [d]istrict [c]ourt to examine a complete administrative record.”

Accordingly, the Supreme Court ordered the district court to rule on the government’s threshold arguments and certify its ruling for immediate appeal “if appropriate.” Thereafter, if the case was not dismissed, the district court and the 9th Circuit “may consider whether narrower amendments to the record are appropriate.” The Supreme Court concluded by stating that its order “does not suggest any view on the merits of” the case.

In sum, although the Supreme Court has removed (for now) one unnecessary burden to elimination of DACA, the final judicial word has not been said. Let us hope that, in considering this case, the federal courts remember that it is their job to construe the law and say what it is—not to impose their subjective immigration policy preferences on the American people.