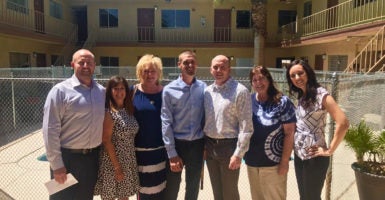 Jeff Iverson is no stranger to the trials faced by drug addicts.

Iverson is the founder, president, and CEO of Freedom House Sober Living Inc., a residential facility in Las Vegas for recovering drug addicts. Freedom House emphasizes  long-term solutions for addicts without a place to stay.

Drug addiction is a problem in Las Vegas, where 273 people died in 2015 from heroin and methamphetamines alone. Iverson was born and lived in Las Vegas most of his life, so the drug problem there is more than familiar to him. “Substance abuse is the worst health crisis we have in the community,” he said in a phone interview with The Daily Signal.

Earlier in his life, Iverson had his own struggles with drugs.

Iverson said his addiction began when he was 13 years old, when he started smoking cigarettes. He said that though he grew up in a good home, he experimented with other drugs without anyone knowing. Between the ages of 16 and 18, Iverson used marijuana, alcohol, LSD, and cocaine.

Despite his growing dependency on strong narcotics, Iverson said he was able to graduate high school and hold a job. But by the time he was in his 20s, he struggled to keep his life together. He took meth daily, and his family and friends became increasingly suspicious.

His behavior was affected by his substance abuse. He spent more time with other drug addicts and continued to hurt his relationships with the people who cared about him.

“My mom was the only one who didn’t turn her back on me,” Iverson said. “[But] the people who love me the most feared me the most.”

At age 25, Iverson said, he wasn’t able to hold a job and soon became homeless. He was involved in drug possession, trafficking, and manufacturing.

His family hired someone in 2002 to find him and encourage him to seek help at a treatment center. Iverson said he agreed to go, but only to get out of his situation, not necessarily to get rid of his chemical dependency.

But in 2005, Iverson said, he finally realized he was an addict. He was arrested for possession of heroin and meth and spent three weeks in jail. The court ordered him to participate in a drug program.

Iverson said he became clean in 2006.

“Unfortunately, that’s what it takes to stop addicts in their tracks,” he said. “I was grateful for the court-ordered programs.”

In 2007, Iverson came up with an idea for a program for addicts like himself. He said he knew a lot of people who were trying to get clean, but had no place to stay, which made it more difficult for them to recover.

Addicts with good insurance and employment status have an easier time getting help, Iverson said, but most people who have a problem getting off drugs don’t have those luxuries.

He and a friend purchased a few apartments for drug addicts to live in. Within the first six months, 20 people were living in the apartments, but that number quickly grew to between 40 and 50 people.

“The [police] thought I was crazy,” Iverson said, when he told them about his project.

But today, the Las Vegas Police Department is one of Freedom House’s largest sponsors.

Iverson said the recidivism rates for criminals, including those arrested for drug-related crimes, are high, which shows that rehabilitation programs need to be designed to ensure long-term success for recovered people.

“I don’t know any for-profit treatment centers that provide self-sufficiency plans,” he said.

Patients who decide to participate in the Freedom House program are expected to take responsibility for themselves. They live in shared living spaces of two people or more. The program requires residents to clean their clothes, buy their own groceries, attend their meetings, and not be in possession of any narcotics.

“We believe that in addition to understanding the disease of addiction and learning how to cope in life without using substances, self-sufficiency and accountability are key components to successful long-term recovery,” Iverson said. “We strive to teach our residents to make good and personally responsible choices in every area of life promoting overall well-being.”

But what Iverson said sets Freedom House apart from other residential treatment programs is its focus on long-term stability for recovering addicts, giving them the resources they need to sustain themselves and become functioning members of society.

Along with having on-site drug and behavioral supervisors, Freedom House has an on-site food bank, an adult education program in partnership with the Clark County School District in Nevada to help residents graduate high school, and other opportunities to help people get back on their feet.

Residents spend 60 to 90 days in the treatment program and then an additional 90 to 120 days in their transitional program, depending on the individual needs of the patient.

Though many patients that graduate move away to restart their lives, losing connection with the program, Iverson estimates that out of the 2,200 people Freedom House served, 75 percent of the people who come in for treatment complete the program successfully.