‘The Last Jedi’: A More Satisfying Trip to a Galaxy Far, Far Away 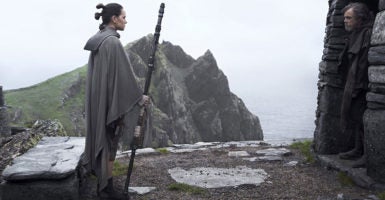 It makes sense, then, that this time of year is fraught with competing emotions—hope (thanks, Jyn and Cassian) and worry (thanks, J.J. Abrams).

As a fanboy who grew up watching the original six films and reading the Expanded Universe novels—not the airport newsstand fodder that Disney now insists is canon—I walked into “The Last Jedi” with one hope: that I would leave the theater not wishing this new series of “Star Wars” films ultimately would become “The Last Trilogy.”

To my relief, writer-director Rian Johnson’s take on the galaxy far, far away fulfills that hope, and then some. After processing the film for a few days, free from the hot takes and heated opinions of others, where I stand on this latest entry in the franchise that I love became pretty clear. Caution: Minor spoilers ahead.

Its predecessor, Abrams’ “The Force Awakens,” was an unmitigated dumpster fire of a science fiction film with some “Star Wars” props thrown in. But “The Last Jedi,” while an imperfect film, in many ways recaptures the spirit of the franchise while giving us reasons to care about the main heroes and villains, both old and new.

At its core, this film is about four characters—Luke, Leia, Rey, and Kylo Ren. And with the untimely passing last winter of Carrie Fisher, who played Leia in five of the eight main movies so far, this film’s portrayal of their interconnected stories is only that much more poignant.

In an older Luke Skywalker (Mark Hamill), we get perhaps the most compelling arc of the film. Not only do we get to feel Luke’s sense of guilt and shame over his failure to create and lead a new Jedi order and curb his nephew’s dark-side tendencies, but we get a glimpse into what his own mentor, Obi-Wan Kenobi, surely felt decades earlier over his own failure with Luke’s father.

However, unlike Obi-Wan, we get to see Luke truly turn the corner, with some timely advice from an old friend. And in doing so, he further cements his place in our hearts as one of the most powerful Jedi masters in “Star Wars” history.

Leia’s journey is also quite compelling, as she takes the reins of a Resistance even more on the ropes than when we last saw them in the previous film. While she doesn’t blast any holes in detention center tunnels or choke any Hutts, she displays a quiet resolve and poise forged by decades of hardship to a degree not remotely present in “The Force Awakens”—which in its own way is even more satisfying.

In Rey, much like Luke in “The Empire Strikes Back,” the audience sees pure potential and raw power, but also the same combination of determination and impulsivity that cost Luke his right hand and almost destroyed the Rebellion.

What makes Rey more absorbing in “The Last Jedi” is her imperfection, her willingness to act without considering all alternatives. Balancing this impulsivity, however, is a vision of goodness and love for what is good, making Rey perhaps the most likable of the new generation of characters.

In addition, this film delivers one visual spectacle after another, in multiple instances giving fans visuals never before seen in a “Star Wars” film.

This does not mean there are not substantial problems with the saga’s latest entry. Not only is the Finn/Rose storyline completely illogical from a strategic point of view, it just is not that interesting from a storytelling point of view. It fails to advance the main plot and instead feels like a half-hearted attempt to sow the field of corporate profits with the seed of spinoffs.

Another problem: At the conclusion of “The Last Jedi,” we still have essentially no information about chief bad guy Snoke. Andy Serkis’ magnetic performance aside, the mystery surrounding Snoke’s character has ceased to be intriguing and is now just frustrating.

Where did Snoke come from? Does he have some connection to other figures we already know in the “Star Wars” universe? How did he seduce Kylo Ren? Don’t hold your breath for answers.

At this point Snoke appears destined to be another throwaway villain like so many in the Marvel Cinematic Universe. Apparently for Disney, it’s like “Whose Line Is It Anyway”—the stories are made up and the bad guys don’t matter.

You’re better than this, Disney. I think.

Finally, from a pure filmmaking standpoint, the screenwriters and editors make some puzzling choices. This results in a film that is not as tightly edited or well-paced as it should be.

As a “Star Wars” film, “The Last Jedi” still ranks below the original trilogy, the spinoff “Rogue One,” and probably “Revenge of the Sith.” This, however, does not mean it is a poorly made or unenjoyable entry.

While setting up a third film that must pay off several important narrative threads, “The Last Jedi” delivers surprisingly riveting character arcs and reintroduces our galaxy to the relatable and engaging heroes we loved from the original trilogy in a way “The Force Awakens” failed to do. More importantly, it just feels more like “Star Wars.”

“The Last Jedi” gives me slightly more confidence that Episode IX will deliver on the promises and give us a satisfying conclusion to the trilogy. But I will also keep in mind some pretty sage wisdom I once heard: “Great, kid. Don’t get cocky.”