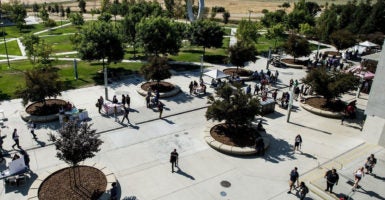 “While I won’t debate this fool, why don’t you all set up some sort of an MMA thing between me and him," a University of California, Merced lecturer says of conservative author Ben Shapiro. (Photo: Andrew Kuhn/ZUMA Press/Newscom)

A lecturer at University of California, Merced declined to debate conservative author Ben Shapiro, but offered to fight him, according to an audio recording.

Fernando Cortes Chirino, a sociology lecturer at the Merced campus, addressed Shapiro’s upcoming visit and suggested he would enjoy “ripping this fool’s shoulder out of his socket” in a charity fight, reported Campus Reform.

“I wouldn’t debate him, because being in the same room as that fool is putting this nonsense fascist ideologue on equal footing with me, using my real degree to legitimize garbage politics that are at best nonsensical,” Chirino said, according to the audio recording released Wednesday.

“Gladiator? You should pass this around,” the lecturer told students. “While I won’t debate this fool, why don’t you all set up some sort of an MMA [mixed martial arts] thing between me and him? And then, the winner can take those $40,000 and give them to whatever charity they want … gladiator, my a–.”

“The recording of a University of California lecturer stating how they would enjoy inflicting harm upon Ben Shapiro deeply disturbs the College Republicans at UC Merced,” Harry Duran, president of College Republicans on the campus, told Campus Reform. “Shapiro, [along with] all members of the UC Merced College Republicans, were repeatedly called ‘white supremacists’ and ‘fascists’ during Fernando Chirino’s lecture.”

The Daily Caller News Foundation sought comment from Chirino and the University of California, Merced, but didn’t receive a response in time for publication.

Another professor at Merced, Ross Avila, made headlines in 2016 for insisting that white men account for 90 percent of terrorists in America.

The university’s fraternity and sorority life staff coordinator also asserted in 2016 that using the term “Greek life” to describe fraternities and sororities was “cultural appropriation.”