Doomsday Will Not Follow Repeal of Obamacare’s Individual Mandate 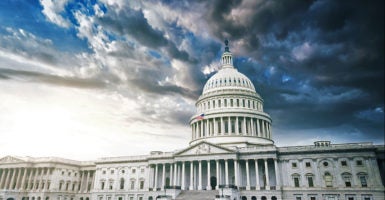 Congressional repeal of Obamacare’s individual insurance mandate penalty is not tantamount to pressing the button on the doomsday machine.

Critics of the Senate tax bill say repeal of the mandate penalty to buy Obamacare coverage will result in a spike in premiums, an increase in the numbers of the uninsured, and a “collapse” of the health insurance markets. In other words, the individual mandate is the “glue” that holds Obamacare together.

The assumption: Millions of Americans will buy Obamacare coverage—regardless of whether they want it or like it—because the government forces them to do it, and penalizes them if they do not.

Do we have compelling evidence that this is, in fact, the case? No.

Do we have evidence that the mandate is not the “glue” holding everything together? Sure do.

No human behavior is inevitable, of course. That is why, in the case of the individual mandate, the certitude of its supporters is unwarranted.

If the mandate were such a powerful force in reducing the numbers of the uninsured, restraining premium growth, and contributing to a robust expansion of choice and competition in the health insurance markets, then almost four years of empirical evidence would verify that proposition. It does not.

Consider coverage. In its November assessment, the Congressional Budget Office estimates that repeal of the individual mandate would result in 10 million fewer insured Americans over the next 10 years, including 5 million persons who are getting “free” care through Medicaid.

Accessing even “free” goods and services requires federal coercion, apparently in the uniquely weird world of federal health policy. Since 2010, as noted by the White House and others, the Congressional Budget Office’s coverage projections—upon which future coverage reductions are based—have not only been wrong, but in many cases, spectacularly wrong.

Curiously, in its assessment, the Congressional Budget Office reports that the agency is now revising its methodology, and says the “estimated effects on the budget and health insurance coverage would probably be smaller than the numbers reported in this document.”

The crucial policy question is this: Does the law’s individual mandate—and its penalties—drive coverage increases?

Examining coverage data from 2012 through 2014, researchers writing in the New England Journal of Medicine, including professor Jonathan Gruber, observed:

When we assessed the mandate’s detailed provisions, which include income-based penalties for lacking coverage and various specific exemptions and penalties, we did not find that the overall coverage rates responded to these aspects of the law.

Well, no. When the 2017 option is, say, paying $695 or an average monthly premium of $393 combined with an average deductible of $4,328, the mandate is no more powerful as an economic incentive today than it was in 2014, when Gruber rendered his assessment. Meanwhile, despite the individual mandate, coverage levels have not only fallen dramatically below the Congressional Budget Office’s earlier projections, but they also appear to be levelling off.

Independent analyses, based on raw insurance data, show a continuing poor performance in private insurance enrollment. Over the 2014-2016 period, public and private enrollment grew by 15.7 million persons, according to a Heritage Foundation analysis, but 89 percent of that growth was attributable to Medicaid and Child Health Insurance Program enrollment.

Between 2014 and 2016, there was a significant drop in the number of “unsubsidized” persons in the individual market from 11.1 million to 9.4 million.

In 2016 alone, individual market enrollment actually declined by 583,000. The mandate, whatever else it is accomplishing, is not preventing the decline.

Consider also premiums. When Congress enacted Obamacare, the law’s supporters believed the individual mandate would compel dramatic participation in the markets, and the influx of new enrollees would stabilize premium growth.

Beginning in 2014, the first year of the law’s full implementation, consumers in the individual markets, with very few exceptions, were stunned by rate shocks. In 11 states, for young 27-year-olds, premiums more than doubled. And the same was true for older enrollees, aged 50, in 13 states.

Surveying the uninsured that year, Bankrate.com found that one-third of the uninsured planned to remain uninsured, and 41 percent of those responding claimed the Obamacare coverage was “too expensive.”

The big “no shows,” from the beginning, were the younger and healthier enrollees that were supposed to enroll in the exchanges and spread the risk, and therefore restrain or even reduce the premium costs. Obama administration officials initially expected 40 percent of their initial enrollment to be comprised of persons 18 to 34.

In 2015 and 2016, premiums continued to rise—a direct contradiction of President Barack Obama’s silly promise that the law’s enactment would mean that “typical” families would see a $2,500 reduction in their premiums.

The big premium picture is depressing. Since 2013, Obamacare’s premiums for single coverage have averaged an increase of 99 percent, while family premiums have increased 140 percent. Whatever impact the mandate is having on the insurance markets, it is not restraining premium growth

The anticipated “market collapse” has, in fact, already happened, and the individual mandate did not prevent it. In 2013, there were 395 insurers in the individual markets. That number declined to 307 in 2015, and down to 218 in 2017.

Preliminary data indicates that insurer participation will fall further down to just 181 in 2018. The Obamacare exchanges were never real “markets” in the first place, but federally supervised regulatory agencies where private coverage is “private” in name only.

The individual mandate with its penalties is not, in fact, the “glue” that is holding Obamacare together. It never was.

The lifeblood of the law is the generous taxpayer insurance subsidies, which attract and maintain the historically sluggish enrollment. The muscle and bone of Obamacare is the massive federal regulatory regime that governs the state health insurance markets.

The state exchanges have not blossomed into robust insurance markets, rich in choice and competition, but have declined to the point that they are, in effect, stagnant, heavily subsidized federal risk pools, disproportionately populated by the poor and the sick.

While Obamacare has reduced cost shifting to hospital emergency departments through exchange subsidies and Medicaid expansion, the levels of private insurance enrollment that Obamacare’s defenders anticipated did not occur.

The job of Congress is not to maintain a monumental policy failure. Rather, Congress needs to strike out in a new direction and make policy changes that will allow state health insurance markets to flourish, and create conditions that will encourage millions of Americans to purchase coverage because they value that coverage—not because the IRS threatens them with penalties.