Tillerson Speech Hits Right Notes on Europe, but Weak on Support for Brexit 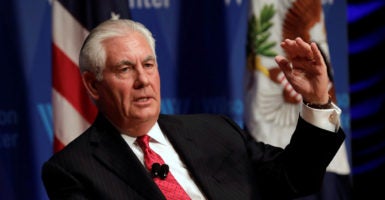 The secretary reaffirmed America’s commitment to NATO, robustly defended the sovereignty and territorial integrity of Ukraine, and pushed back against Russia’s aggressive behavior in the region.

In addition, Tillerson shined a necessary light on the Balkan region, and the importance of lessening Europe’s reliance on Russian energy sources. However, the speech missed a significant opportunity to express strong U.S. support for the United Kingdom’s decision to leave the European Union.

The secretary’s speech laid out a roadmap for the Trump administration’s policies toward Europe.

Key to the secretary’s speech was his highlighting of America’s recommitment to Europe in the wake of the Obama administration’s failed “Russian reset.” Reaffirming this enduring commitment, he said, takes the form not only of an ironclad commitment to NATO’s Collective Defense Guarantee, but also continued U.S. force deployments to Europe, as well continued robust funding for the European Deterrence Initiative, for which the Trump administration has requested a $1.4 billion increase.

Tillerson enunciated that U.S. interests in Europe rest not only on military foundations but also upon a bed of shared principles, stating, “Our nations live according to a self-evident truth on which Western civilization is built: liberty, equality, and human dignity.”

Across the globe, and particularly in Europe, Russia is actively working to undermine these principles, utilizing force, fraud, and coercion to weaken the institutions and civil society upon which democratic, free nations stand.

Nowhere are Russia’s pernicious actions more brazen than in its invasion of Ukraine, annexation of Ukraine’s Crimean Peninsula, and the war Russia continues to propagate in the Donbas. Russia has also sought to destabilize Ukraine’s government, and utilized cyberattacks and disinformation to drive wedges within Ukrainian society.

Tillerson’s wholehearted support for Ukraine is welcome and the right policy. His message that “Minsk-related sanctions will remain in place until Russia reverses the actions that triggered them” is a message that will resonate clearly in Moscow.

Moving forward, U.S. efforts to build partner capacity in Ukraine, along with continued U.S. and European sanctions against Russia for its aggression in Ukraine, must be coupled with a policy of providing defensive weapons to Ukraine.

Furthermore, as Tillerson correctly indicated, Ukraine’s future success will be largely determined by efforts to root out corruption, reform the economy, and entrench the rule of law in the nation. The U.S. must not forget to provide support for these critical reform efforts as well.

Much of the secretary’s speech was spent highlighting the advantages the U.S. and our European partners enjoy when we work together. Militarily, our allies in Europe are helping defeat ISIS in Iraq and Syria, contributing to NATO’s ongoing mission in Afghanistan, helping to remove the radical Islamist threat in North Africa, and working to eliminate the threat emanating from a nuclear Iran and North Korea.

Tillerson noted that the collective strength of the trans-Atlantic alliance has and will remain a prime target for our adversaries. In particular, Russia has sought to undermine trans-Atlantic cohesion.

Tillerson stated, “Russia has often employed malicious tactics against the U.S. and Europe to drive us apart, weaken our confidence, and undermine the political and economic successes that we have achieved together since the end of the Cold War.”

Trans-Atlantic cohesion will be vital in tackling bubbling instability in the Balkans, continuing to lesson Europe’s reliance on Russian energy resources, and facing down the continued threats from Iran, North Korea, Islamist terrorism, and a revanchist Russia.

Tillerson throughout his remarks highlighted the importance of sovereignty for liberty, democratic governance, strong nation states, and civil societies. Focusing on maintaining and expanding sovereignty was a central message in Tuesday’s speech, and a key facet of President Donald Trump’s policy toward Europe.

Tillerson should have strongly tied the emphasis on sovereignty to U.S. support for Brexit and a post-Brexit U.S.-U.K. free trade deal, which has already been powerfully backed by the U.S. president. In addition, he should have made it clear that the United States does not support the development of an EU defense identity, which will ultimately undermine NATO.

In his remarks, the secretary of state urged “the EU and U.K. to move this [Brexit] process forward swiftly and without unnecessary acrimony.” Thus far, however, the European Commission, the executive branch of the EU, has not approached the negotiations over Great Britain’s exit in good faith, making unacceptable demands for a vast “Brexit divorce bill” before talks can even begin over a U.K.-EU trade arrangement.

It is Brussels, not London, that is responsible for any delay in moving forward with the Brexit negotiations.

The Trump administration must make it emphatically clear in its statements on Europe that Brexit is a great positive that will strengthen the trans-Atlantic alliance and the enduring principles of sovereignty and self-determination.