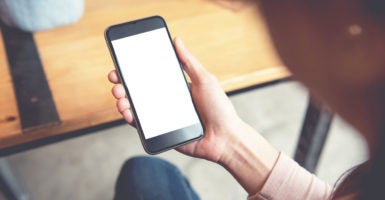 The Supreme Court heard oral arguments on Wednesday in a case that will determine whether law enforcement must get a warrant to access the location of one's cellphone. (Photo: iStock Photos)

The question facing the justices is: Does the government have to get a search warrant in order to obtain a cellular service provider’s business records of the location of a customer’s cellphone, and thus the location of the customer himself?

Nathan Wessler, a staff attorney at the American Civil Liberties Union who is representing Timothy Carpenter, argued that the court must answer yes, because modern technology allows the government to track a person all day, every day, for potentially hundreds of days, revealing too much private information for the government to access without a warrant.

Michael Dreeben, the deputy solicitor general, argued for the government that since this case only involves information other than the content of a communication that is maintained by a third party, the Fourth Amendment does not bar the government from accessing it through a court order based on a lower standard than the probable cause standard necessary to procure a warrant.

This is widely perceived as a challenging case, and law professors, many legal scholars, privacy groups, and technology companies have written much about it—and more than 20 parties have filed amicus (or “friend of the court”) briefs at the Supreme Court, all seeking to inform its ruling.

The court may draw a new line in its Fourth Amendment jurisprudence in this case, which may affect law enforcement practices and privacy expectations in an age when so many are so often glued to, and store private information in, a cellphone.

From December 2010 to the end of 2012, Carpenter led a group of co-conspirators in robbing cellphone stores at gun point in Michigan and Ohio.

Police arrested an accomplice of Carpenter’s who confessed to the crimes and divulged several other accomplices’ cellphone numbers. That gave law enforcement a potential means of tracking down Carpenter.

Service providers keep records of cellphone locations for their own business purposes, such as spotting poor network areas and determining roaming charge boundaries, and law enforcement can use location data early in an investigation to help place a suspect at a crime scene.

In the Stored Communications Act of 1986, Congress enabled the government to obtain cell location records from cellular service providers through a court order based on “specific and articulable facts showing that there are reasonable grounds to believe that … the records or other information sought[] are relevant and material to an ongoing criminal investigation.”

The information that the government may obtain is plentiful, including a subscriber’s name, address, what numbers they have dialed, and historical “cell-site” records, showing all of the cell towers that a cellphone has connected with in a given period of time.

As Wessler said at oral argument, “Congress quite clearly was not thinking about the existence of and certainly not law enforcement interest in historical cell site location information” when it passed that law in 1986, when only “[t]hree-tenths of 1 percent of Americans had cell phones.”

And today, Wessler argued, police have a “categorically new power” to track a person around the clock because “these perfect tracking devices that 95 percent of Americans carry in their pockets” communicate their location to cell service towers dozens of times a day.

In this case, the government obtained Carpenter’s historical cell-site records through a court order, which showed his location throughout each day over a period of 127 days. This data helped place him at or near the scene of several of the robberies.

At trial, the federal district court rejected Carpenter’s Fourth Amendment argument that the government could only obtain that information through a warrant, finding that he had “no legitimate expectation of privacy in cell site data” while law enforcement had “relied in good faith” on the Stored Communications Act.

Carpenter was convicted on multiple counts of robbery and using a firearm in a violent crime, and was sentenced to a lengthy prison term, and the Court of Appeals for the 6th Circuit affirmed.

Now, Carpenter invites the Supreme Court to carefully consider whether its case law on the Fourth Amendment offers adequate protection from government surveillance in a digital age.

Here, the court articulated the so-called third-party doctrine, that the government does not have to have a warrant to access information that a person shares with a third party even if it was shared “on the assumption that it will be used only for a limited purpose and the confidence placed in the third party will not be betrayed.”

The court affirmed that theory in Smith v. Maryland (1979), ruling that police did not need a warrant to obtain a phone company’s records of each number that a robbery suspect dialed on his home phone.

On Wednesday, Wessler argued that the “Court could not have imagined” today’s “technological landscape” when it decided those cases, and “lower courts have been struggling mightily to apply Miller and Smith to highly sensitive digital age records.”

It is clear that the Supreme Court has been revisiting some of its settled precedents in light of new technologies—and the government has not fared well in some of these cases.

In Kyllo v. United States (2001), the court held in a 5–4 decision that the warrantless use of a thermal imaging device to scan a person’s home was an unconstitutional search. The court also unanimously held in Riley v. California (2014) that a warrantless search of the contents of a suspect’s cellphone following his arrest violates the Fourth Amendment.

And in United States v. Jones (2012), the court held that law enforcement authorities violated the Fourth Amendment by installing a GPS tracker underneath a suspect’s car without a warrant.

The majority opinion, by Justice Antonin Scalia, noted that—unlike the earlier Miller and Smith cases—the government had “occupied” the suspect’s personal property, his car, and continually tracked its location for 28 days.

In a concurring opinion, Justice Sonia Sotomayor offered the so-called “mosaic theory,” that government collection of location data would not necessarily trigger the Fourth Amendment unless it collects enough information about a person’s whereabouts over a long enough duration to create “a mosaic” of the suspect’s conduct.

On Wednesday, Justice Elena Kagan said that like Jones, the Carpenter case involves “a new technology that allows for 24/7 tracking.” She and several other justices, including Sotomayor and Stephen Breyer, seemed sympathetic to Carpenter’s argument that some new rule is needed in an age when people store much of their sensitive information on their phone, and carry it with them wherever they go.

Still, it seems unclear whether and where the court will want to draw a line in this case. As Breyer said, “This is an open box. We know not where we go.”

But one thing is clear. However the justices decide this case, they will have to explain their decision. And the explanation, as much as their conclusion, will potentially affect how law enforcement, cellular service providers, and cell users all look at the cellphone.