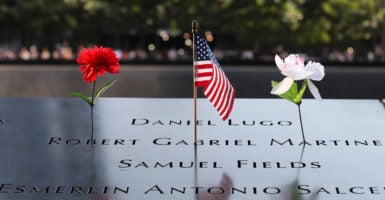 Flowers and a U.S. flag are placed on a plate on which the names of 9/11 victims were inscribed at the National September 11 Memorial and Museum in New York,, on Sept. 11, 2017. (Photo: Wang Ying Xinhua News Agency/Newscom)

This article is the first in a series of five. You can read the second article, “Anti-Terror Law’s Safeguards Against Incidental Collection of Domestic Data Are Sufficient,” here and the third article, “Ample Safeguards of Civil Liberties Warrant FISA Section 702’s Reauthorization By Congress,” here.

Section 702 of the Foreign Intelligence Surveillance Act (FISA) will expire at the end of December.  As we wrote in 2016, broadly speaking, the Section 702 program targets non-U.S. persons reasonably believed to be located outside the United States in order to acquire foreign intelligence.

Over the past several years, this surveillance of the online activities of foreigners has been a critical and invaluable tool for American intelligence professionals and officials. Knowledgeable officials note that more than 25 percent of all current U.S. intelligence is based on information collected under Section 702.

Still, there are those who have concerns about the program. These critics believe that the program, as currently implemented, infringes on Americans’ rights. Their concern hinges on the inevitable reality that in the course of collecting information about foreign actors, the Section 702 program will also collect information about American citizens.

As a result, some opponents liken the Section 702 program to the government telephony metadata program disclosed by Edward Snowden, and characterize Section 702 as an instance of government overreach. Such comparisons are misguided and unfair.

The program is so vital to America’s national security that Congress should reauthorize Section 702 in its current form.

This four-part article series will explain the 702 program, and discuss in detail the hot-button issues of incidental collection, congressional oversight, queries, and the legal and constitutionality of the program. Furthermore, we take on the critics of the program, and rebut their concerns.

Ultimately, we conclude that Section 702 should be reauthorized in full.

Under Section 702, the U.S. attorney general and the director of national intelligence may jointly authorize surveillance of people who are not “U.S. persons.” U.S. persons is a term of art in the intelligence community that means people who are American citizens and also those who are permanent resident aliens. As such, the targets of Section 702 surveillance can be neither citizens nor permanent residents of the U.S.

Section 702 authorizes the government to acquire foreign intelligence by targeting non-U.S. persons “reasonably believed” to be outside U.S. borders. Taken together, these two requirements identify the fundamental domain of Section 702 surveillance: it applies to foreigners on foreign soil. It is expressly against the law to attempt collection of information from targets inside the U.S.—whether Americans or foreigners—or to deliberately target the collection of online communications of American citizens.

The law also requires the government to develop “targeting procedures”—the steps the government needs to take in order to ensure that the target is outside the United States at any time that electronic surveillance is undertaken. Obviously, that is sometimes difficult.

A cellphone number, for instance, remains the same whether the phone is physically overseas or in the U.S., and the fact that someone has a U.S. cellphone number does not necessarily indicate whether the owner or user of that cellphone is a foreigner or an American. Hence, targeting must be tied to the geolocation of a phone and some knowledge about the owner/user, rather than solely to the phone’s number.

Ultimately, it is the targeting procedures, not the targets themselves, that must be approved by the U.S. Foreign Intelligence Surveillance Court.

The 702 Program Has Helped US Uncover Terror Plots

If that were all that the 702 program involved, it would likely not be particularly controversial. Few Americans have expressed grave concerns about America’s overseas intelligence collection.

As Paul Rosenzweig explains in his article on incidental collection, the 702 program cannot be used to target any U.S. person or any person located in the U.S., whether that person is an American or a foreigner. The government is also prohibited from “reverse targeting” under 702—that is, the government cannot target a non-U.S. person outside the U.S. when the real interest is to collect the communications of a person in the U.S. or of any U.S. person, regardless of location.

The public record suggests that the Section 702 program has indeed helped in the fight against terrorism. Classified records might provide additional support for this conclusion but they are unavailable to us.

The Privacy and Civil Liberties Oversight Board—a bipartisan panel in the executive branch that reviews actions the executive branch takes to protect the country from terrorism, and also monitors civil liberty concerns—has reported that more than one-quarter of National Security Agency reports on international terrorism include information that is based in whole, or in part, on data collected under the Section 702 program.

As we explained in our paper in 2016, the Privacy and Civil Liberties Oversight Board found that the 702 program “makes a substantial contribution to the government’s efforts to learn about the membership, goals, and activities of international terrorist organizations, and to prevent acts of terrorism from coming to fruition.”

Additionally, the program has “led the government to identify previously unknown individuals who are involved in international terrorism, and it has played a key role in discovering and disrupting specific terrorist plots aimed at the United States and other countries.”

Although the details supporting these findings are classified, the board has also said the program has played a role in discovering, and disrupting, specific terrorist plots aimed at the United States by enabling the government to identify previously unidentified individuals involved in international terrorism.

Additionally, the U.S. House of Representatives Permanent Select Committee on Intelligence has posted three declassified examples from the NSA that involved the effective use of Section 702 collection in 2009: the New York City subway attack plot; the Chicago terror investigation; and Operation Wi-Fi.

But the fact remains that current and former intelligence officials, members from both political parties across two administrations, national security law experts in the private sector, and the Privacy and Civil Liberties Oversight Board maintain that 702 has been and continues to be a very important intelligence tool for overseas intelligence collection.

This Program Is Lawful and Constitutional

One last aspect of Section 702 needs to be addressed: the suggestion that the program might in some way be unconstitutional or unlawful. As Rosenzweig explains in this series, and we wrote in our paper, the relevant case law firmly supports the constitutionality and legality of the Section 702 program.

In the “In re: Sealed Case” decision, the United States Foreign Intelligence Surveillance Court of Review held that FISA did not require the government to demonstrate to the FISA court that its primary purpose in conducting electronic surveillance was not criminal prosecution and, significantly, the PATRIOT Act’s amendment to FISA, which permits the government to conduct surveillance of agents of foreign powers if foreign intelligence was the “significant purpose” of the surveillance, did not violate the Fourth Amendment. The court avoided an express holding that a foreign intelligence exception exists, but held that FISA could survive on reasonableness grounds.

In 2008, the “In re: Directives Pursuant to Section 105B of FISA” decision applied the principles derived from the special needs cases to conclude that the foreign intelligence surveillance authorized by the Protect America Act possesses characteristics that qualify it for a foreign intelligence exception to the warrant requirement of the Fourth Amendment.

Notably, the “In re: Directives” decision cites a 4th Circuit opinion for the proposition that there is a high degree of probability that requiring a warrant would hinder the government’s ability to collect time-sensitive information and thus impede vital national security interests.

In April 2016, the first decision addressing the constitutionality of upstream collection under Section 702 was publicly released. The FISA court issued a declassified opinion in which it concluded that use of information collected under Section 702 authority for domestic investigations satisfied both constitutional standards and was within the statutory bounds of the FISA Amendment Act.

Notably, for purposes of this discussion, the court reached this conclusion after having had the benefit of a public advocate who articulated a position contrary to that of the government.

Judge Hogan cites “In re: Directives” in support of the proposition that the Fourth Amendment does not require the government to obtain a warrant to conduct surveillance in order “to obtain foreign intelligence for national security purposes [that] is directed against foreign powers or agents of foreign powers reasonably believed to be located outside of the United States.”

It Is Crucial 702 Is Reauthorized in Its Entirety

Congress should reauthorize 702 in its entirety. There is no need for a further sunset of its provisions, as it has demonstrated its usefulness; and an arbitrarily forced reconsideration by Congress is unnecessary, a waste of time and money, and would come at the expense of national security.

Returning to pre-9/11 procedures by limiting Section 702 authority is likely also to take America back to the post-9/11 anguish of investigations into why available intelligence was not used, why dots were never connected. This time the fault would lie not with the intelligence community but with lawmakers who exploited mistrust of government to frustrate the collection and use of intelligence information—a function that only government can perform, and that it must perform, if we are to survive.

A properly configured Section 702 program has met that challenge to the benefit of the American public. At a time when international terrorism is on the rise, the United States must have a lawful, robust foreign intelligence capability.