I Worked on Barry Goldwater’s Campaign. Here’s the Moment I Knew It Was Over. 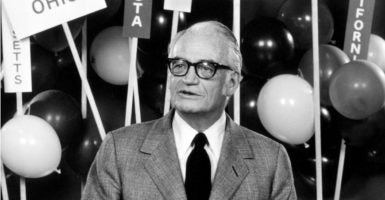 Sen. Barry Goldwater, R-Ariz., won the Republican nomination for president in 1964 but would lose to President Lyndon B. Johnson. (Photo: Everett Collection/Newscom)

In prime time on Thursday, July 16, 1964, Sen. Barry Goldwater, R-Ariz., was introduced to the Republican National Convention and the country by the great unifier, Richard Nixon, who predicted that when Goldwater got through, President Lyndon Johnson would be singing “Home on the Range.”

He urged the faithful to ignore the polls and the columnists, reminding them that “Mr. Gallup isn’t going to be counting the votes on Nov. 3.”

Far from being weaker than it was in 1960, Nixon said, the Republican Party had more congressmen, more senators, more governors, and more state legislators. Ever the bridge builder, he mentioned Pennsylvania Gov. William Scranton and New York Gov. Nelson Rockefeller, and such was their respect for the man who had put Alger Hiss in jail that the Goldwater delegates applauded the liberal governors politely.

America needs new leadership. It needs a man who will go up and down the length of the land crying out, ‘Wake up, America, before it is too late!’ This is a time, my fellow Republicans and my fellow Americans, not for the New Deal of the 1930s or the Fair Deal of the 1950s or the Fast Deal of Lyndon Johnson but for the Honest Deal of Barry Goldwater.

Make your decision tonight about a man who has been called Mr. Conservative, a man who is now, by the action of the convention, Mr. Republican, a man who after the greatest campaign in history will be Mr. President—Barry Goldwater!

Watching from our campaign communications center at the Mark Hopkins Hotel, I saw my hero, deeply tanned and silver-haired, ensure his defeat with his acceptance speech.

Goldwater walked slowly down the flag-draped catwalk to stand at the rostrum, where he was met by the martial notes of “The Battle Hymn of the Republic.”

Red, white, and blue balloons poured down from the rafters while a chorus of voices more powerful than the Mormon Tabernacle Choir chanted, “We want Barry! We want Barry!” San Francisco’s Cow Palace seemed ready to explode.

The senator waited patiently while the convention chairman pounded and pounded his gavel until at last the great hall fell silent. I placed a copy of his address in my lap and followed along.

“I accept your nomination with a deep sense of humility. The Good Lord raised this mighty Republic to be a home for the brave to flourish as the land of the free—not to stagnate in the swampland of collectivism, not to cringe before the bully of communism.”

(He would inspire a free society, not guarantee a Great Society.)

(Ways based on the Ten Commandments and the Constitution, not Freud and the editorials of The New York Times.)

“This party, with its every action, every word, every breath, and every heartbeat, has but a single resolve, and that is freedom.” (So hard to gain and so easy to lose, I thought.)

“Tonight there is violence in our streets.” (There had been Harlem riots, again.)

“Corruption in our highest offices.” (Everyone knew Bobby Baker was not only the clerk of the Senate but the panderer of the Senate. Baker would do anything to win a vote for Johnson, including arranging afternoon “dates” for randy senators at the Alibi Club in the Carroll Arms Hotel.)

“Aimlessness among our youth.” (Rebels whose only cause was themselves.)

“Anxiety among our elderly.” (Who could blame them, with runaway federal spending and a Social Security system ready to implode?)

“We are at war in Vietnam. And yet the president, who is the commander-in-chief of our forces, refuses to say whether or not the objective over there is victory.”

(President Goldwater would direct the Pentagon to win the war with overwhelming air and sea power and without nuclear weapons or U.S. ground troops.)

“Anyone who joins us in all sincerity is welcome. But those who do not care for our cause, we don’t expect to enter our ranks in any case. What is needed is focused and dedicated Republicanism that rejects unthinking and stupid labels.” (Like “Goldwaterism” and “right-wing extremism.”)

The senator paused, his face stern. The next words were underlined in the text: “And I would remind you that extremism in the defense of liberty is no vice!”

The delegates jumped to their feet, hollering their approval, while the conservatives in the galleries blew their horns like the Israelites marching into battle.

Then he offered the other half: “And let me remind you also that moderation in the pursuit of justice is no virtue!”

I sat before the TV set watching our delegates exult in the words that sealed our defeat four months before Election Day. The firebrand in me hailed the senator for throwing the gauntlet before the liberals while the pragmatist in me winced.

From my campaign diary:

The acceptance speech was a disappointment to me. It was too literary, too long, too general, and continued that ‘extremism-moderation line’ which will continue to haunt us throughout this campaign. … It was written for posterity which because of that speech and what it portends will not include [Barry Goldwater] as president.

In those days there were no spin doctors to work the news media and declare that the senator’s speech was one of the most brilliant and evocative speeches in convention history.

If we had held a news briefing the next day, we could have placed the extremism line in perspective with references to Patrick Henry (“Give me liberty or give me death!”) and Martin Luther King Jr., who had endorsed extremism in his celebrated “Letter from a Birmingham Jail.”

Goldwater stood by his words, remarking 30 years later when I interviewed him, “I’d make that speech again, any place, any time—I think it’s the best statement I ever made.” But he never used the “extremism” line again in the campaign.

This adapted excerpt was taken with permission from “Just Right: A Life in Pursuit of Liberty” (Intercollegiate Studies Institute, 2017).