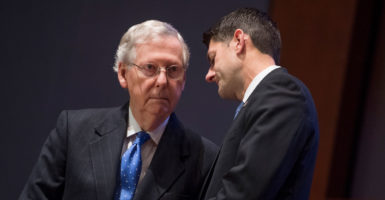 Conservatives are calling for Republicans in Congress to fulfill their campaign promises by supporting President Donald Trump’s spending proposal and to not enact amnesty in a year-end deal with Democrats.

A letter released Monday and signed by 44 conservative leaders explains that Virginia is “in ruins” after Republican losses at both the statewide and local level earlier this month. The leaders warn that the Republican majority in the House could be in jeopardy next.

“Your consultants and managers are out of excuses—and your conservative grassroots are running out of both patience and time,” the letter states. “So stop panicking and start legislating.”

Congress, the letter says, is heading toward a path in December that will lift “the domestic spending caps set in 2011 Budget Control Act (BCA) debt deal, allowing ballooning trillion dollar deficits in future years,” will give amnesty to the illegal immigrants who came as minors, will give “billions of dollars of bailouts” to insurance companies, and will only allot a small amount of funding for Trump’s border wall.

The letter is signed by the leaders of many conservative organizations, such as Colin Hanna, president of Let Freedom Ring; Jenny Beth Martin, chairman of Tea Party Patriots Citizens Fund; and Ginni Thomas, wife of Justice Clarence Thomas, of Liberty Consulting.

The letter also calls on Congress to repeal Obamacare in 2018 and says that what happened in Virginia was just an “aftershock” with more to follow.

Rick Manning, president of Americans for Limited Government, an organization that works to prevent the expansion of government, helped write the letter and also signed it. He said the circumstances behind the current Congress is disappointing as they have failed on their platform promises, and because of this, the Republican majority is in danger.

“The truth is this letter is designed to really reach a hand out to the Republicans who are floundering and say, ‘We’ll help you find your way back to where you were when you got elected,’” Manning said. “We’re hoping they’ll pull up alongside us, and we’ll be able to fulfill the promise of the Republican majority, which was a limited government promise.”

Here is the full text of the letter with signatories:

Virginia is in ruins. Your House majority trembles with fear of what 2018 holds for them. Your chances of picking up Senate seats are fading as fast as a lobbyist’s handshake. Your consultants and managers are out of excuses – and your conservative grassroots are running out of both patience and time. So stop panicking and start legislating: Make America Great Again by supporting Trump’s Budget, opposing reckless spending, and killing any amnesty deal.

Earlier this year, President Trump proposed a responsible budget that balances within 10 years, restores critical funding to our national defense priorities and border wall, and cuts wasteful domestic spending. Republican leaders in Congress appear ready to discard that 2016 election mandate. Indeed, despite their majorities in both houses of Congress, they are poised to make yet another bad deal with the Democrats.

The stage is set for enacting the Schumer-Pelosi agenda under Republican auspices – and you all know it. Unless the rank and file of the Republican membership takes a stand now, you will be presented with this Christmas departure package:

Lifting the domestic spending caps set in 2011 Budget Control Act (BCA) debt deal, allowing ballooning trillion dollar deficits in future years
DACA amnesty that could give legal status to millions of illegal immigrants
Billions of dollars in bailouts (known as CSRs) for insurance companies, many of which are experiencing record profits, token funding for a border wall, a mockery of the $4.1 billion the President requested.

That year-end deal would squander President Trump’s hard fought electoral victory. It would so alienate your conservative base that the Old Dominion’s electoral disaster could be replicated from coast to coast.

Our organizations represent every part of the Conservative Freedom agenda, from tax cuts to social issues, from regulatory reform to national security. We unite on three priorities that must be achieved by the end of the year: tax reform to spur economic growth, restoring defense funding after years of neglect, and putting our country back on a sustainable fiscal path. In control of Congress and the Presidency for the first time in a decade, Republicans must reverse the leftist policies that threaten our economy, our military, and the hopes of the American people.

We respectfully offer this warning. Voters around the nation still feel ignored by the leadership on Capitol Hill. After almost a year in power, it seems you no longer intend to restore constitutional government, Well, do you? If so, please consider this message a check-list toward that goal. The American people took seriously your campaign promises. You should too. You should cut wasteful spending, rebuild our national defense, and stop amnesty. And we expect you to follow President Trump’s call to finally repeal Obamacare in 2018, which is hurting millions of Americans with sky-high premiums and loss of quality health care.

One year ago the election of Donald Trump hit official Washington like an earthquake. What happened in Virginia on November 7th was only an aftershock, one of many that surely lie ahead. Ignore their message at your peril. The opportunity, if you act with daring and integrity, is unlimited both for our majority and for our mandate to bring Conservative Freedom to America.

Signed (organizations are for identification purposes only),