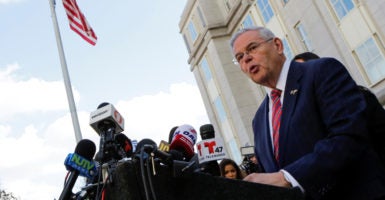 Sen. Robert Menendez speaks to media as he departs the court after his corruption trial ended in a mistrial. (Photo: Eduardo Munoz/Reuters/Newscom)

The jury in the corruption trial of Sen. Bob Menendez, D-N.J., said for a second time Thursday that it is deadlocked on the counts of the indictment, prompting U.S. District Judge William Walls to declare a mistrial.

“We cannot reach a unanimous decision,” a note from the jurors read. “Nor are we willing to move away from our strong convictions.” One juror told reporters  the jury was deadlocked 10-2, with 10 favoring acquittal.

The mistrial is a temporary victory for the embattled Democrat. Federal prosecutors will now decide whether to bring another case against him.

The panel first indicated Monday afternoon that it was struggling to reach a verdict, but Walls instructed the jury to keep deliberating.

Judges often give deadlocked juries an instruction called an “Allen charge,” sometimes referred to as a “hammer charge.” The instruction reminds jurors of the time, effort, and resources expended over the course of the prosecution, and asks jurors in the minority to reconsider the reasonableness of their positions. The jury then retires to resume deliberations. Walls declined to pursue that course on the advice of the jury, which has been deliberating for over a week.

“Based upon what has been so clearly and definitively written, that would be a futile exercise,” Walls replied when prosecutors asked him to order further deliberations.

The mistrial is a major defeat for the Department of Justice, which has struggled to bring successful corruption prosecutions in recent years. Matthew Miller, a former DOJ spokesman, noted prosecutors have not secured a major political corruption conviction since 2008, when GOP Sen. Ted Stevens of Alaska was convicted of making false statements.

Recent Supreme Court decisions have narrowed the scope of corruption laws. The justices established in a 2016 case, McDonnell v. U.S., that public officials only violate anti-corruption laws when they accept gifts, payments, or benefits in exchange for a specific and official act. That sort of specific, quid-pro-quo corruption is often difficult to prove.

Prosecutors in the Menendez case put forward a “stream of benefits” theory of the law, arguing that a donor essentially had the senator on retainer, by making gifts and privileges available to Menendez on the understanding he would provide assistance as needed at some point in the future.

After days of deliberations, the jury appeared to reject that theory, leaving federal prosecutors searching for a proposition on which to advance future corruption prosecutions.

A defiant Menendez spoke to reporters after Walls declared the mistrial, and vowed to take revenge on New Jersey politicos who jockeyed to succeed him in the Senate.

“To those of you who were digging my political grave so you could jump into my seat, I know who you are and I won’t forget you,” he said.