New House Caucus Stands Against Communism and for Its Victims 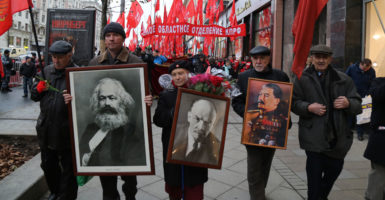 The new Victims of Communism Caucus will honor those who suffered from communism in the past and will fight against communism seen in the modern world as well. (Photo: Nicholas Muller/ZUMA Press/Newscom)

Members of Congress have created a new caucus to recognize and remember everyone who has suffered at the hands of communism and for those who still live under communism in the countries where it still exists.

The bipartisan caucus is “dedicated to raising awareness of how communism victimized and enslaved more than 100 million people in the past,” according to a statement from the caucus.

“We should not be lulled into thinking that communism is no longer a threat to freedom in the world, given that many people still toil under its hateful, totalitarian rule,” Ross said. “Our caucus will ensure that we do not forget those victims, who were forced to choose between their faith and the cruelty of a dictatorship. We must hold fast to the virtues of freedom.”

Members of the caucus say they will be focusing on the continuing human rights abuses of the Castro regime in Cuba, North Korea’s nuclear program, and Russian expansionism in Ukraine, as well as on the deteriorating economic and political situation in Venezuela.

The formation of the caucus comes on the heels of the 100th anniversary of the Bolshevik Revolution, when Russia was taken over by the forces of Vladimir Lenin.

“It sends a powerful message on behalf of the more than 100 million people victimized by communism in the last century and one-fifth of the world’s population who still live in a single-party state that adheres to this failed ideology,” he said.

“Our bipartisan caucus is determined to ensure that Congress and the American people remain aware of, and continue to fight against, the deadly and ongoing evil of Marxist and Leninist ideology—still promoted by communist dictators,” Smith said.