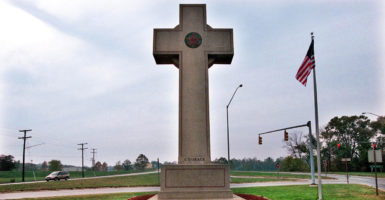 A three-judge panel of the 4th U.S. Circuit Court of Appeals ruled that a World War I cross memorial in Maryland is unconstitutional. (Photo: The Washington Times /ZumaPress/Newscom)

They’re no longer with us, but I can still remember them marching every Fourth of July parade when I was a kid.

Sadly, all that remains of our World War I veterans are some fading memories and the historical memorials to their dedication. And if atheists have their way, the memorials will soon be faded from history as well.

Last week, the American Humanist Association got one step closer to that goal, thanks to a three-judge panel of the 4th U.S. Circuit Court of Appeals.

After duking it out in the courts for a half-decade, the battle over a 92-year-old cross in Bladensburg, Maryland, took another twist when two liberal activists chucked the First Amendment in favor of their own anti-faith bias.

In a 33-page opinion, the majority insists that the 40-foot monument “aggrandizes the Latin cross … the core symbol of Christianity.”

But amazingly, it’s not the symbol that bothers them—but its size. “Here it is 40 feet tall; prominently displayed in the center of one of the busiest intersections in Prince George’s County, Maryland, and maintained with thousands of dollars in government funds.”

Chief Judge Roger Gregory could only shake his head in amazement, wondering in his dissent what that had to do with anything.

“In the majority’s view, the memorial is unconstitutional based predominantly on the size of the cross, and neither its secular features nor history could overcome the presumption. But such a conclusion is contrary to our constitutional directive.”

Built in 1925, the cross was meant to honor 49 Prince George’s County residents who died in World War I. Words like “valor,” “endurance,” “courage,” and “devotion” are chiseled into the monument’s base as a reminder of the sacrifice it takes to defend freedom—the same freedom, ironically, this court is denying.

Like a lot of veterans, our friends at First Liberty Institute, who are representing the American Legion, are concerned about what the ruling means for other displays—like the rows of crosses marking soldiers’ graves at Arlington Cemetery.

As usual, the court’s reasoning is completely selective—and subjective. Asked how they could justify this response when Arlington is also federally funded, the judges fumbled around for an answer.

“The crosses there,” the majority tried to explain, “are much smaller than the 40-foot-tall monolith at issue here. And, significantly, Arlington National Cemetery displays diverse religious symbols, both as monuments and on individual headstones.”

First Liberty attorney Jeremy Dys is as frustrated as the rest of us that the American Humanist Association is too busy being offended to consider our service members’ wishes.

“I think it’s very discouraging for the thousands of veterans across the country who have basically been told their war memorials are suspect if any religious imagery appears near them,” Dys said. “I think it’s important that we honor veterans the way that veterans choose to honor themselves.”

After all, these memorials are a lot more than pieces of granite. They’re America’s way of telling an important story.

It’s the same principle in the Old Testament, when leaders would build piles of stones to remind future generations about God’s faithfulness. Like Bladensburg, when the memories had faded they wanted their children and grandchildren to see those monuments and ask what they meant.

Now, atheists are working overtime to rewrite that history and sandblast the role of faith in America. They’ve already chipped away at the substance—taking prayer and the Bible out of schools. Now they want the symbols too.

This ruling is exactly the kind of dangerous precedent Christians have to stop. Kelly Shackelford’s First Liberty Institute is certainly trying. If that means taking this fight all the way to the Supreme Court, they’re ready.