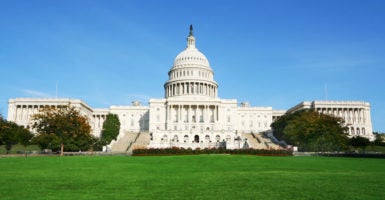 The Senate passed its 2018 budget by a vote of 51-49 on Thursday, clearing the way for tax reform. (Photo: iStock Photos)

The proposal is a significant step toward implementing the president and Congress’ tax reform agenda. However, it fails to make significant cuts to federal spending—an important piece of the puzzle toward long-term economic prosperity.

The budget lays out reconciliation instructions to the Senate Finance and House Ways and Means committees that would allow for up to $1.5 trillion in net tax cuts. A late amendment to the Senate plan adopts components of the House-passed budget, which may diminish the need for a conference committee.

It also allows for any reconciliation bill produced by the Ways and Means Committee to move directly to the House floor.

The House could approve the budget as early as next week. If the House accepts the Senate changes as they are, this could accelerate the timeline for a tax package to move to the House floor by several weeks.

The recently released framework for tax reform now has a budget to carry it through the Senate. The Senate-adopted budget paves the way for tax reform, providing both reconciliation protections and a decreased revenue baseline of $1.5 trillion over the next 10 years.

The reconciliation instructions set out in the Senate budget enables Congress to fast-track reform in the Senate, limiting debate and lowering the necessary vote threshold to a simple majority.

A $1.5 trillion tax cut over 10 years is truly a good step away from the revenue-neutrality constraint, which had previously shackled the tax reform effort and was included in the House budget.

It cuts projected federal revenues by only a modest 3.5 percent over the next 10 years, bringing projected revenues from roughly $43 trillion to about $41.5 trillion.

The Joint Committee on Taxation will measure this revenue reduction dynamically by incorporating the economic benefits of tax reform. But congressional scorekeepers are notoriously inaccurate when it comes to predicting revenues from pro-growth tax reforms.

In the past, the Joint Committee on Taxation score has shown one-fifth the economic growth that was predicted by comparable third-party estimates. Because the committee staff will very likely dramatically underestimate the economic growth produced by tax reform, the true cost to the budget will be much smaller.

The budget is just a first step. Those supportive of tax reform must remain focused as there is a lot of work still ahead. A $1.5 trillion revenue reduction is not enough to avoid making the hard decisions required for truly updating our broken tax code.

Without eliminating items like the state and local tax deduction and repealing other tax subsidies for special interests, the proposed tax plan could require much more than $1.5 trillion in revenue reductions.

Fully eliminating these tax preferences will be crucial if tax reform is to actually lower rates and implement structural reforms like full expensing.

Though the Senate-passed plan is a positive step toward tax reform, it is not perfect.

The bill does little to address Congress’ addiction to spending, which if left unchecked will continue to drive the nation closer to a fiscal breakdown. In fact, it removed a provision from the House-passed bill that required $203 billion in spending cuts through reconciliation.

It also set the stage for what most observers already assumed would happen—another massive budget deal like the one agreed to by President Barack Obama and House Speaker John Boehner, where taxpayers were losers.

The Senate plan calls for defense spending to be raised to $640 billion in fiscal year 2018. These funds are necessary and appropriate to help rebuild a military that has faced continued uncertainty and underfunding the past several years.

While adequately funding national defense should be a top priority for Congress, it should not come in exchange for more deficit spending. Rather, Congress should carefully prioritize funding within the aggregate Budget Control Act caps.

Increases to defense spending should and can be offset with cuts to outdated and ineffective domestic programs.

Instead, this plan would allow defense spending to be raised without requiring any of the additional costs to be offset by domestic or mandatory cuts.

While the past two budget deals were imperfect, they did force Congress to offset increases to discretionary spending with cuts to mandatory programs. To remove this requirement is fiscally irresponsible and sets a dangerous precedent.

If Congress does take action to revise the Budget Control Act caps in 2018 and beyond, it must do so in a responsible manner that fully offsets increased spending with meaningful mandatory cuts and without the use of budget gimmicks.

Faster economic growth makes deficit reduction easier. An economy growing at less than 2 percent, with increasing numbers of people drawing on social programs, will struggle to reduce the debt, let alone reform the largest drivers of our fiscal crisis.

A faster growing economy will help set the stage for the necessary reform to the rest of the budget. Pro-growth tax reform is a necessary first step to putting America’s fiscal house in order, but spending and entitlement reforms must be part of Congress’ agenda as well.

Comprehensive tax reform, paired with tax cuts for individuals and American businesses, can unleash American prosperity, creating more jobs and higher wages for all Americans. This budget is an important step toward achieving that goal.