Why the New Obamacare ‘Fix’ Is a Dud, and Why the Narrative Justifying It Is Wrong 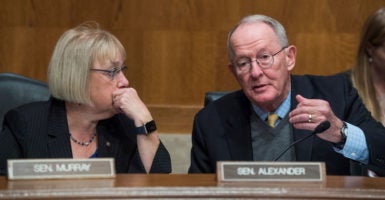 While President Donald Trump’s response to the bipartisan health care proposal on Capitol Hill has slid from optimistic to negative, and then back to optimistic, he would be right to move away from this deal.

Despite its advocates’ claims, this proposal isn’t needed to help low-income Americans or stabilize the insurance markets—and is a major distraction from the steps really needed to help with both.

While Trump had made statements indicating he would potentially support a bipartisan bill to tackle health care reform, he quickly expressed concern over the proposal introduced by Sens. Lamar Alexander, R-Tenn., and Patty Murray, D-Wash., which would allegedly stabilize health care markets.

Trump Tweeted out on Wednesday:

I am supportive of Lamar as a person & also of the process, but I can never support bailing out ins co’s who have made a fortune w/ O’Care.

The legislation has been billed as a way to address Trump’s recent executive order ending cost-sharing reduction payments to health insurance companies.

The common narrative is that Trump’s decision will collapse the health insurance market if there isn’t some way to “bail out” insurance companies that were promised Obamacare subsidies for offering higher-level plans at a cost below their value.

As The Daily Signal explained in May:

The cost-sharing reductions are subsidies designed to reduce out-of-pocket costs for low-income patients who purchase silver-level plans through Obamacare’s exchanges. The subsidies are only available to marketplace customers with an income between 100 percent and 250 percent of the federal poverty line ($12,000 to $30,000 for an individual).

In 2017, 7 million people—58 percent of marketplace enrollees—qualified for cost-sharing reductions, according to the Department of Health and Human Services.

These subsidies were challenged on constitutional grounds, as the funding was never appropriated by Congress.

The Trump administration has now effectively mooted that legal challenge by announcing that it will no longer pay the subsidies. However, some see the move as a dangerous step that will cause damage to the health insurance industry and dramatically increase premiums.

The subsidies, in general, are a poorly conceived idea. Obamacare effectively told insurers to give low-income enrollees platinum-level coverage for the price of silver-level coverage, and promised to pay the addition cost (about 30 percent more) in the form of these back-door subsidies.

The Alexander-Murray bill would essentially continue the cost-sharing payments for an additional two years to “stabilize” the market and keep premiums “low.”

Alexander said that he worked on this proposal to “help lower premiums and make insurance available to the 18 million Americans in the individual market in 2018 and 2019.”

This bailout is premised on the idea that without it, the health care markets will collapse and most Americans will see their premiums increase dramatically.

Some, like Vanity Fair’s Abigail Tracy, have insinuated that stopping the subsidies is simply a cunning plot by the Trump administration to wreck Obamacare.

“There doesn’t appear to be any policy upside to Trump’s move to sabotage the current health care system, except to use its failure as leverage to pass a new law,” she wrote.

But this is a false narrative.

States have already prepared for the withdrawal of these cost-sharing payments, and continuing to pay these subsidies will do little to either stabilize or destabilize health insurance markets for most Americans.

For instance, in July, California’s state Obamacare exchange announced that it “took steps to protect most consumers from any rate increases caused by the uncertainty surrounding cost-sharing reduction payments.”

In other words, insurance regulators in California, Pennsylvania, and other states are effectively converting this program into how it could have been better designed from the beginning—more generous coverage for low-income people that carries a higher up-front premium, but with higher up-front subsidies to match the costs.

According to The Hill, Ed Haislmaier, a senior research fellow at The Heritage Foundation, said continuing the federally subsidized payments keeps the Obamacare market afloat, but does nothing for the vast and unsubsidized individual health insurance market.

“What is instead needed to stabilize the unsubsidized market is the removal of Obamacare’s cost-increasing insurance mandates and misguided regulations,” he said. “To fix that Obamacare-caused damage and lower the cost of insurance, Congress will need to make other policy reforms.”

Of course, this change is not in the Alexander-Murray bill, nor are there any meaningful proposals to fix Obamacare. It’s simply a costly proposal to fix a non-crisis as the real problems with our health care system go unaddressed.