In 1986, Most Senate Democrats Voted for Tax Reform 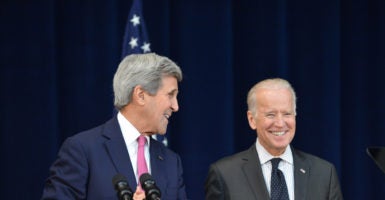 “If I hear any more Democrats talking about ‘the bottom rate is going up,’ I’ll remind them they might want to contact Vice President Joe Biden, Vice President Al Gore, perhaps Secretary John Kerry, because they voted with President [Ronald] Reagan to lower that 11 percent rate to zero, just as we are lowering the 10 percent rate to zero as well,” says Rep. Kevin Brady, R-Texas. (Photo: State Department/Sipa USA/Newscom)

More than 30 Senate Democrats voted for President Ronald Reagan’s Tax Reform Act of 1986—including one still in office today—and conservatives say Democrats today have no reason to vote against a similar tax reform package now before Congress.

“If I hear any more Democrats talking about ‘the bottom rate is going up,’ I’ll remind them they might want to contact [Joe Biden, Al Gore, and John Kerry], because they voted with President [Ronald] Reagan to lower that 11 percent rate to zero, just as we are lowering the 10 percent rate to zero as well,” Rep. Kevin Brady, chairman of the House Ways and Means Committee, said at a recent event at The Heritage Foundation.

Sen. Patrick Leahy, D-Vt., who has represented Vermont in the Senate since 1975, also voted for Reagan’s tax-reform package, as did then-Sen. Max Baucus, D-Mont., who retired from the Senate in 2014.

Gore, Biden, and Kerry all voted along with more than 30 other Democrats, including the now-deceased Sen. Ted Kennedy of Massachusetts, to pass Reagan’s tax reform plan.

Reagan’s tax reforms reduced the top marginal individual income tax rate from 50 percent to 28 percent, lowered the corporate rate from 46 percent to 34 percent, and reduced the number of tax brackets from 14 to two, according to the Americans for Tax Reform, a nonprofit conservative taxpayer advocacy group.

It calls for roughly doubling taxpayers’ standard deduction (an individual’s first $12,000 of income would become tax-free, as would the first $24,000 for married couples) and for condensing the current seven tax brackets to three.

The three tax brackets in Republicans’ proposed framework are 12 percent, 25 percent, and 35 percent.

The framework would end personal exemptions for dependents, increase the child tax credit, and eliminate the estate tax, which opponents call the “death tax.”

President Donald Trump has made overhauling the tax code a major agenda item during his first year in office and has used social media to communicate the importance of passing tax reform.

The Democrats only want to increase taxes and obstruct. That's all they are good at!

Republicans are going for the big Budget approval today, first step toward massive tax cuts. I think we have the votes, but who knows?

Lee Edwards, distinguished fellow in conservative thought at The Heritage Foundation, said he thinks tax reform will be more difficult to pass Congress today than it was in Reagan’s time.

“We’re far more divided politically and culturally today than we were then,” Edwards said, adding:

During the Reagan era, it was possible that there were Democrats and Republicans to come together, and a lot of it was because of Reagan’s personality, his grace, his ability to put people at ease. So there was that on which he was building to try to get that or any legislation through.

“Reagan was successful in promoting—and, I think, accurately—the idea that it was a tax cut across the board, and that these were tax reforms across the board, which benefited everybody, and of course the ’86 [reform] was aimed directly at the wealthy by taking away some of these exemptions which they enjoyed,” he said.

Dan Holler, vice president of Heritage Action for America, the lobbying affiliate of The Heritage Foundation, told The Daily Signal in an email that left-leaning politicians would be hypocritical not to vote for tax reform today.