23 Photos of the Wildfires Burning Through California 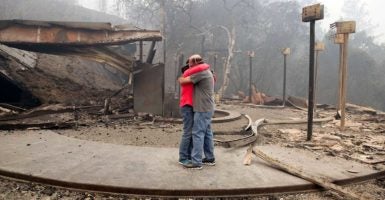 Wildfires have ripped through Northern California leaving little in their paths for days — and are still being fought. Hundreds of people are missing and thousands more will find their homes destroyed when they return. Here’s an inside look into the devastation. Anthony D’Amico and his children Gio and Bella try to salvage objects in the burnt out neighbourhood in Santa Rosa. (Photo: Barbara Munker/dpa/Newscom) Cars have been reduced to smoldering scrap and buildings burnt to a shell. (Photo: Barbara Munker/dpa/Newscom) Many Californians who fled the onslaught of flames now return to a nightmare. (Photo: Barbara Munker/dpa/Newscom) Josh Williamson, 8, gathers Nerf guns from the rubble of his home that was destroyed in the Canyon Fire 2. (Photo: Jeff Gritchen/ZUMA Press/Newscom) Several hundred people crowded into the public library to get updated information about the Mendocino Complex Fire. Their city is without cell service, their 911 system is down, and only satellite internet is working after the fire damaged a fiber-optic cable. (Photo: Mark McKenna/ZUMA Press/Newscom) The sun rises through a cloud of smoke in the Rincon Ridge area after a wildfire in Sonoma County. (Photo: Paul Kitagaki Jr/ZUMA Press/Newscom) Jordan Williamson, 14, said he “saved” himself when he found a picture of his 5-year-old self in the rubble of his home. (Photo: Jeff Gritchen/ZUMA Press/Newscom) A kitchen continues to burn in Anaheim Hills after Canyon Fire 2 blew through the area. (Photo: Will Lester/ZUMA Press/Newscom) Firefighters battle to save homes on Canyon Heights Drive during the Canyon Fire 2 in the Anaheim Hills. (Photo: Will Lester/ZUMA Press/Newscom) A firefighter puts out hot spots in a home that was destroyed on Via El Estribo in Anaheim Hills. (Photo: Jeff Gritchen/ZUMA Press/Newscom) Firefighters and dropping planes are used to battle flames along Jamboree Road near the evacuation zone in Orange County. (Photo: Mindy Schauer/ZUMA Press/Newscom) The Santa Rosa Hilton Hotel burns to the ground on the evening of Monday, Oct. 9, in Santa Rosa, California. (Photo: Paul Kuroda/ZUMA Press/Newscom) Juliette Martin, 63, cries after returning to her home of 16 years that was destroyed in the Coffey Creek neighborhood during a wildfire in Sonoma County. (Photo: Paul Kitagaki Jr/ZUMA Press/Newscom) Firefighters work to extinguish a fire on Via El Estribo during the Canyon Fire 2. (Photo: Jeff Gritchen/ZUMA Press/Newscom)