Freedom Is Eroding in Hong Kong. Here’s What the US Can Do. 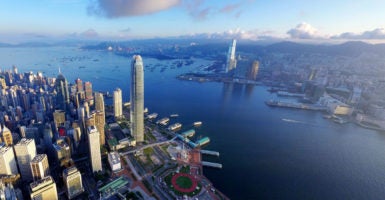 After governing Hong Kong for decades as a colony, Great Britain returned Hong Kong to China in 1997. (Photo: iStock Photos)

Diana Guevara is a member of the Young Leaders Program at The Heritage Foundation.

The viability of the “one country, two systems” model in Hong Kong may be in question, says the Congressional-Executive Commission on China in its annually released report to Congress.

During the reporting period, the commission documented a number of unnerving trends pointing to the erosion of freedom in the Hong Kong Special Administrative Region. Given these findings, the U.S. should consider ways to clarify its policy toward Hong Kong.

The commission’s annually released report is the result of a congressionally mandated reporting mechanism that reviews human rights and rule of law in China. It also reviews conditions in Xinjiang, Tibet, Hong Kong, and Macau.

Trends in Hong Kong are particularly concerning. After 1997 when the British returned Hong Kong to China, Hong Kong entered a “one country, two systems” policy that sought to preserve core elements of Westernization that had grown up during British rule.

This framework permits Hong Kong to pursue capitalist economic policies until at least 2047—the 50th anniversary of its return, by Britain, to Chinese sovereignty. It also lets Hong Kong retain some political autonomy.

As a result, Hong Kong citizens enjoy a limited form of democracy that allows for an independent government.

During the 20 years since the handover, this norm has been sustained. However, starting in 2014 the Chinese Communist Party began using its influence to infiltrate Hong Kong’s government.

According to the commission’s report, the National People’s Congress Standing Committee’s interpretation of Hong Kong’s Basic Law had the effect of encouraging the election of particular candidates. At one point, the interpretation influenced the Hong Kong judiciary to deem two democratic candidates ineligible to run after they altered their oaths to show support for Hong Kong’s autonomy.

More recently, the Communist Party has used more aggressive tactics to manipulate the system. In addition to silencing government officials, the unidentified Chinese authorities reportedly abducted Hong Kong booksellers in an effort to not only show dominance and control in the region, but also to quiet opposition to the Communist Party.

The Hong Kong Policy Act of 1992 allows the United States and Hong Kong to maintain a separate economic partnership from that of the People’s Republic of China under the expectation that Hong Kong will enjoy relative autonomy.

However, based on recurring human rights violations, it is evident that the Chinese government exercises undue power over elements of Hong Kong’s domestic policy.

To confront this, the U.S. should seek new ways to affirm human rights and democracy in Hong Kong. One way to do this is through the Hong Kong Human Rights and Democracy Act. This bill would renew the requirement of an annual report on the democratic conditions in Hong Kong. The report will address topics ranging from economics to human rights.

This bill, in conjunction with the Policy Act of 1992, could work in tandem to clarify U.S. intentions in the region.

It is in the interest of both Hong Kong and the United States to ensure that Hong Kong’s democratic freedoms are preserved. The Trump administration should pay close attention to current political tensions in Hong Kong and pursue mutually beneficial policies that safeguard economic partnerships, and preserve human rights and freedom in Hong Kong.