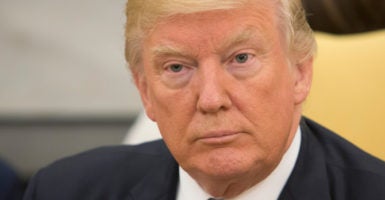 When President Donald Trump took office, there were three vacancies on the Federal Reserve’s Board of Governors. Then, unexpectedly, Fed Vice Chairman Stanley Fischer resigned, effective “on or around October 13, 2017.”

Throw in the fact that Fed Chair Janet Yellen’s term as chairman expires Feb. 3, 2018, and it’s very easy to see why so many conservatives have been excited about Trump fighting the cabal of elites running Washington.

Trump could easily appoint five of the seven Fed board members, including the chairman, during a single term in office. That sort of influence means the president can immediately reshape Federal Reserve policy in a way that most presidents simply cannot.

Because the Fed has been navigating one of the most controversial periods in its history—a fivefold increase in its balance sheet, massive credit allocation to the housing and government sectors, and a major expansion of its regulatory reach—conservatives are paying particularly close attention to the pick for the next Fed chairman.

On Friday, the president told reporters he expects to nominate the next Fed chairman in two to three weeks, so conservatives may not have to wait much longer to see how serious the president is about “draining the swamp.”

When it comes to the Fed, a president who talks about draining the swamp and transferring power from Washington, D.C., back to the American people makes many folks­—especially moderate politicians—a bit nervous. And caution is certainly in order, because the Fed exerts so much control on the flow of money, the means of payment for virtually all goods and services.

But one of the main reasons conservatives care about a change in direction is that decades of monetary policy experiments have failed to rid the U.S. of financial crises or to appreciably tame the business cycle. Yet, through it all, politicians have remained content to give the Fed more power and authority. (Dodd-Frank is only the latest example.)

Continuing on this path is the polar opposite of giving power back to the American people.

If the president is serious about transferring power out of Washington, so that people can better control their own lives, he has many well-known scholars to pick from who would signal a shift in direction.

The ideal candidates for the Fed board are those who had nothing to do with creating the Troubled Asset Relief Program, or implementing the Fed’s so-called “emergency” loans during the 2008 crisis. They are those who have openly acknowledged Dodd-Frank did virtually nothing to address the real causes of the 2008 crisis and that more top-down regulation from Washington is the wrong approach.

These candidates would believe in most, if not all, of the following ideas:

On Maintaining Neutrality in the Economy

If Trump really wants to transfer power away from Washington and give it back to the American people, he will infuse the Fed’s Board of Governors with a major dose of new thinking.

If the president uses this opportunity wisely, he can ensure that the Fed board puts less faith in the government’s ability to fine-tune the economy and ensure the safety and soundness of financial markets. He can prove to conservatives that his campaign promises were more than rhetoric.